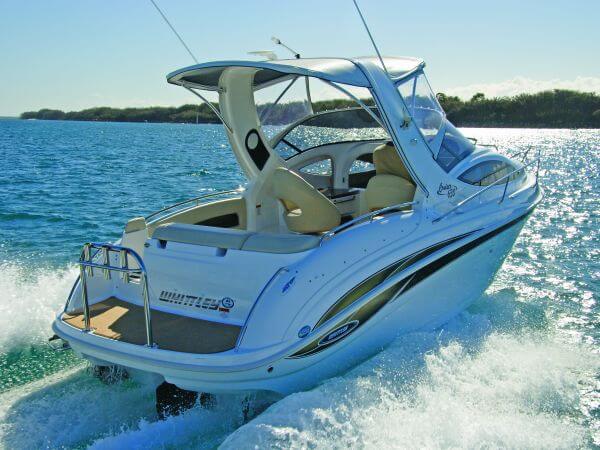 Whittley’s stylish new 630 Cruiser fills a gap in the company’s line-up and will also fill a gap in many families’ weekend activities.

In my opinion, Whittley does a particularly fine job of what I’d call ‘weekenders’; small boats sometimes almost unbelievably well appointed for living aboard. The company’s range has, for some years, included the smallest Cruiser 550, the multiaward-winning Cruiser 660, and the evergreen flagship Cruisemaster 700 – yet another award winner in a stable built by this Victorian-based, proudly Australian family company.

However, between the 550 and 660 models, I’ve often thought there was a significant gap.

Between 5.5- and 6.5-metre boats lies an area where the trifecta of length versus interior space versus cost comes together in a unique blend. Available space allows for possibilities in a 6-ish-metre boat, which simply won’t fit into a 5.5-metre hull, and many times at a cost substantially below a 6.5-metre craft.

In view of its demonstrated genius at producing ‘weekenders’, what Whittley might do with a Cruiser model in this range between their 550 and 660 models always seemed to me to be a question going begging. Of course, that was until the company released a new 630 model in time to be judged in the 2006 AMIF Boat of the Year Awards.

Now I’m sure every Club Marine reader is only too well aware that boats of any size are all about compromise of some kind or another. In choosing any boat, there are indeed some hard decisions to be made and I feel that one of the things that makes Whittley’s weekenders stand out from the crowd is its astuteness in deciding what’s appropriate fitment for any given model.

The new Cruiser 630 embodies this concept beautifully. Case in point: to fit a workable ‘bathroom’ into a 6-ish-metre boat would consume huge amounts of precious space, and blow costs right out as well. In the Cruiser 630, Whittley put an open air shower out on the transom deck (where, presumably, ablutions means wearing bathers) and stayed with a portable toilet tucked away under a bunk in the privacy of the cabin.

It’s a sensible compromise I think, especially since, being a Whittley, the factory has included a heat exchanger-type hot water system. These utilise the motor’s cooling system and (provided it’s running, of course) supply is only limited by freshwater availability – in this case a generous 100 litres.

While we’re talking compromise, the 630 Cruiser is nominally a four-berth boat, although realistically it’s probably more of a quite comfortable proposition for two. An aft dinette does convert into an extra double bunk, and the addition of a rear camper cover means an extra couple, or couple of kids, could sleep there. But to my mind, this would be occasional rather than a regular thing – four adults aboard a 6-metre boat overnight on a regular basis is asking a bit I’d venture.

Two adults plus two kids might be a different matter, though, and this boat is very well set up to cater for just that.

Talking about weekending, our test boat came from Queensland Whittley dealer, Northside Marine, which always specifies insect screening on the front hatch and rear camper covers. As our test took place on southern Moreton Bay, I can only say that you wouldn’t have a weekender any other way. Other boating locations around Australia may be different, but this makes a heap of sense around here.

Full interior lining in the cabin and carpet inside stowage beneath the bunks is another touch I’m enthusiastic about. Intrusive noises – like water slapping against the hull – are a well known cause of unrest for people unaccustomed to sleeping aboard boats, and this reduces it to a minimum.

A compact, yet well-equipped galley is set along the portside in the helm area, where a step-down into the deck forward of the passenger seat makes headroom. There’s a single burner spirit stove beside a small triangular sink, with a two-piece worktop hinged above them and a 47-litre, 12-volt bar-style fridge is provided below that. Ample pantry storage is found in shelves above the galley and in a big locker beneath the passenger seat.

Both helm and passenger seats feature inbuilt suspension and although our test was conducted in winter, I note that the bucket seats have a cutout down low on the squab to cool them in hot weather. The helm seat is both height and fore and aft adjustable and the steering wheel is tilt adjustable, ensuring driving comfort for all shapes and sizes.

Power-assisted hydraulic steering, supplied with the MerCruiser power unit in our test boat, also contributed towards effortless running. At the controls, you can’t help notice the dash area is very classy, with a timber-trimmed instrument panel and plenty of room for additional instrumentation, such as the navigation and fishfinding electronics we enjoy these days.

Once at rest, both helm and passenger seats can be swivelled aft, effectively adding extra seating to the aft lounge/dinette area – with or without the small removable dining table.

Whittley has equipped the Cruiser 630’s cabin for privacy and security, with a sliding, solid lockable door. Once inside the cabin, I found headroom a little low at the forward end of the bunks; I guess it’s the price you pay for this boat’s sleek good looks.

Instead of providing a removable infill for the bunk, Whittley has hinged the centre section so it simply drops out of the way. Given that our test boat came optioned with a 15-inch screen LCD TV and DVD/CD/MP3 sound system, it appears that lazing in the cabin watching the footy, enjoying a movie, or chilling out to your favourite music – with the help of cushions against the bulkhead – will be a popular pastime.

Twin batteries, with an isolator system to ensure there’s always enough power to start the motor, come standard in the Cruiser 630. Interior lighting is thoughtfully placed and those who might prefer to read will be happy to find reading lights over the bunk.

Social activities are the domain of the dinette. I was impressed by how the bi-fold dining table and the infill convert the dinette into a bunk (or sunbathing lounge) stow out of the way beside the helm seat.

Extra seating space aft is provided by a portside fold-away seat opposite an L-shaped dinette-cum-lounge. With or without those camper covers, as appropriate at the time, the boat’s aft end is very liveable, with heaps of room for two and enough space comfortably for four, maybe including a child or two.

Adding to the living space, a transom door in the portside of the aft bulkhead leads out onto more deck space above the sterndrive leg. It’s fair to say that Whittley perfected integrating its sterndrive engine boxes into the aft dinettes in previous models, and this clever use of space is just as evident on the 630 Cruiser.

Whittley’s signature transom deck also allows for some relaxing fishing, and serves equally well as a swimming platform, thanks to a folding telescopic ladder tucked away underneath. The central rail seen in our photo-spread simply had three rod holders attached, however a lot of Whittleys I see on the water have either an optional barbecue or a bait board mounted here. They’re options most Whittley owners seem unable to do without.

Storage is, perhaps, the biggest issue in any weekend cruiser, and here again Whittley has excelled with this boat. I’m not going to list all the storage options, because there are just so many. It really is one of those things that Whittley does so well, and proud owners often tell me it’s this attention to the important things in life aboard that keeps their love affair with their boat going.

A major visual element for this new model is the fully moulded targa bar. The targa is not all good looks, though, as it’s very functional and accommodates the full set of canopy covers and clears. The targa bar incorporates an extrusion which allows the covers to easily slip on and off, while still maintaining a water-tight interior. The targa also allows nav lights and aerials to be placed up and out of the way, which adds to the uncluttered look of the stylish exterior. Inside, the targa carries discrete downlights and quality stereo speakers.

Other nice interior touches include sensible placement of switches for the lighting, extra-thick foam in the main bunk, and the way the toilet remains usable when a bed is made up in the cabin.

Whittley’s commitment to detail isn’t restricted to making life comfortable, though. All the windows are real glass and a big windscreen wiper is standard fitment, as is an electric anchor winch and a bowsprit, which captures the anchor so ground tackle can be set and raised from the helm. VHF radio, a digital depth readout, removeable ice box, carpet that unclips for removal and easier cleaning; all contribute to Whittley’s hook-the-trailer-up-andgo-boating approach. In addition, there is a stern anchor, fenders, mooring lines and a boat hook.

Trim tabs are not on the standard fitment list, though, and in my view they should be. I’m a believer that every boat of this type needs tabs and often wonder why they’re not fitted as a matter of course by more boat builders. Some owners don’t understand why trim tabs are fitted or how to use them, but they will certainly appreciate them once they’ve tried them out.

To further my case, our test boat did have tabs and consequently could be trimmed precisely – which only made a pleasant ride even better. The 630 Cruiser hull has finely-raked bows, with distinctly turned-down chines and wide strakes providing a fair amount of flat planing surface in the after sections of the hull. Deadrise is a steepish 20 degrees at the transom.

On the water, the Cruiser 630 rides well, deflects spray effectively and yet has good low-tomid-range performance – partly, it must be said, due to our test boat having trim tabs. And while the 630 would look right at home overnighting in sheltered water, there’s no need to be wary of open water crossings to reach favoured locations in this boat.

Our test boat was powered by a 220hp, multi-pointfuel-injected V6 MerCruiser, delivering power to the water through a MerCruiser Alpha sterndrive unit. This produced a sprightly top speed of over 36 knots, which, I imagine, would be used rarely in such a comfortable cruiser.

For cruising, 20 knots was achieved at 3000rpm – some 2000rpm below the MerCruiser’s maximum – so running anywhere between 15 and 25 knots should be nicely fuel efficient. A 208-litre fuel tank ensures sensible range.

Seems to me this is a boat built to deliver pleasant weekend cruising and that sums it up in a few words!

Situation: 15-knot side winds over mild chop, no discernable current