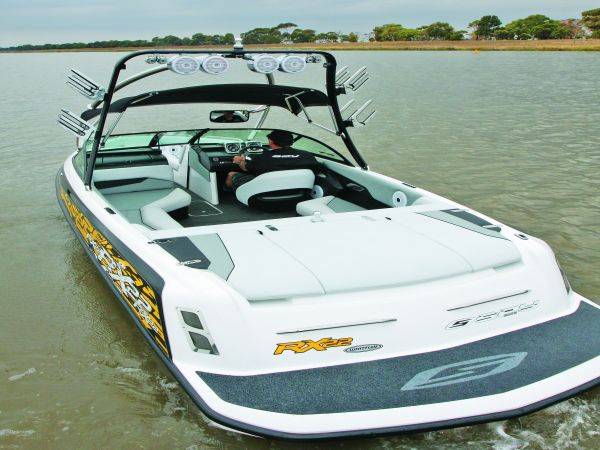 The new Spy RX22 delivers on all its promises.
After walking around, crawling over, riding and driving the Spy RX22, Mark Robinson could only think of one word: ‘flawless’.

In over two decades of boat testing for leading Australian magazines, I’ve encountered many fine boats, a few lemons and a whole swag of craft I would rate from average to good. But it is extremely rare to find one as well-sorted as is the Spy RX22.

Whether looked at from the perspective of its design brief, its build quality or its on-water performance, I could not fault this craft in any way. This should come as no surprise, given that it’s a collaborative effort between Peter Webb’s venerable Performance Marine and the Whittley Marine Group.

To quote the press material that accompanied the Spy RX22, “By combining Peter Webb’s unrivalled understanding of ski boat performance with Whittley’s unique design and engineering capabilities at Campbellfield, Victoria, they have produced clean-sheet designs like no other boat. Beneath their sleek hulls, with a hint of BMW in their moulded haunches, Spy boats are exceptionally strong yet lightweight, thanks to sophisticated computerised design.

“In keeping with Peter Webb’s long experience in first-class ski boat fit-out, Spy boats are powered by MerCruiser (with most using the top-of-the-range Black Scorpion), ride-on customised Easytow trailers and entertain with the very best Clarion audio systems. Spy and Whittley intend to take on the best of American boats in the Australian market and eventually take the battle to the American makers on their home ground.”

Yes, well, that sums up the background and intent very succinctly, so let’s take a closer look.

To the discerning and experienced eye, a well-sorted ski boat is a pleasure to behold on a number of levels which transcend the cosmetic. As I see it, a hull which looks well-balanced and with flowing lines in the right places will work well at the hydrodynamic interface where the hull is interacting with both air and water. And whether watching this craft perform, riding in it, or settling in behind the wheel to put it through its paces, one soon realises that this craft lives up to its expectations.

The Spy RX22 Wake Rear Mount has an overall length of 22 feet (6.7m), a beam of 8 feet (2.45m), a fuel capacity of 120 litres and can seat up to 12 people. The hull is a medium vee with a runner bottom, two planing strakes (one each side) and negative chines, the latter being neither up-nor down-turned. An integrated boarding platform is standard. Spy craft are powered by MerCruiser V-Drives and have a power rating from 270hp through to 395hp. The test boat was fitted with a 5.7-litre MerCruiser 330hp Black Scorpion unit with MPI and driving through a Velvet Drive, Walter V-Drive set-up.

The V-Drive configuration offers a whole swag of benefits, including greater safety for anyone in the water, better handling, increased space, reduced drag, lower bow rise, shallower draft and reduced maintenance. The prop is a 4-bladed 13-inch by 17.5-inch Acme unit, which is manufactured by CNC process in order to provide the most accurate method for consistently producing propellers to the correct diameter, pitch and cup. Peter Webb’s long experience with this make would not have him using any other brand.

I spoke with Steve Whittley about the RX22’s construction and he described it as being built in a time-proven traditional manner, using timber stringers and floor, all of which have been fibreglassed over and which add both rigidity and strength. And as you might expect from Whittley Marine, the gel coat was right up there with the best.

When I asked Peter Webb to sum up this craft in a few words, he said that it was “a cross-over boat; great for both slalom skiing and wakeboarding, with a great wake which is easily adjustable and it is both very easy to drive and a lot of fun when doing so.”

Slipping in behind the tilt-adjustable steering wheel, I found the driver’s seat to be extremely comfortable, roomy and well-supported laterally. Peter pointed out that they import these seats from the US, ensuring that quality of construction and level of comfort is second to none.

At 175cm and 105kg, I found that sightlines to the instruments and through the screen were excellent at all times while driving this craft. The RX22 surges easily onto the plane – quickly and effortlessly and with an absolute minimum of bow rise – confirming Peter’s claim of being very easy to drive.

At absolutely no time during the transition from displacement to planing speed was my forward vision obscured. Even the most vertically challenged driver can flip back a bolster and substantially raise the seat base height.

It was impossible not to be impressed by the ease with which this boat rises on to the plane, with just a gentle hand on the throttle being all that is required; a fact that should translate into good fuel efficiency. Once underway, the hull felt very stable and the Morse cable steering felt light and responsive. Charging back across our own wash at speed showed the hull to be both solid and soft-riding. And throwing it hard into turns gave no sense of instability or of being anywhere near the hulls limits.

This is a hot rod of a boat – a boat that just begs for the throttle lever to be pushed forward so it can strut its stuff. This is a boat you could get very passionate about, with its accent on both performance and driving pleasure – every minute spent behind the wheel was pure fun.

The instrumentation is interesting, to say the least. Instead of the traditional “aircraft cockpit sprawl” of gauges across a broad dash, all the information is contained and displayed in the two pods forward of the driver. It’s similar, in concept, to the dash in an M-Class Mercedes, where the driver is faced with two large instruments: a speedo and a rev counter, each of which contains displays for other functions. The RX22 presents a fresh, clean appearance, totally in tune with today’s high technology look.

A small panel in the centre bottom of the rev counter displays voltage, engine temperature and water pressure while the equivalent panel in the speedo incorporates a clock, the current fuel level and the speed in kilometres per hour. Neat.

Impeccably trimmed in grey, black and white upholstery, the cockpit displays ample seating and storage areas throughout, including an underfloor locker. Up forward, the bow-riding section is not quite as generous in terms of space as some other craft of its size, but in a vessel of any given length there is always some compromise as to how the available space is apportioned. Several decades of skiing and wakeboarding have shown Peter that it is usually kids who want to sit up front and face forward, while adults tend to prefer inhabiting the main cockpit region.

Nevertheless, a fair-sized adult can comfortably sit facing backward in the centre of the bow section and, given that this is how people in the real world tend to position themselves, we need to give full marks to this design decision.

Four grab rails offer a secure hold to bow riding passengers and forward-mounted speakers ensure that those up front are well within aural range of whatever trendy music is blasting through the stereo.

Moving from the bow section to the cockpit (or vice versa) is easy via the centre walkway and once back there, the impression is one of spacious comfort, which is confirmed as one sits or lolls in the various seats and lounges designed with creature comforts foremost in mind. But as pleasant as it might be sprawled across the rear section on a sunny day, or seated in any one of the craft’s comfort zones, I have to say the real pleasure of the SPY RX22 is in driving it, as it does everything so well.

Powering along at speed, the engine noise is in no way intrusive and conversations between passengers do not require shouting. Wake control is accomplished by the touch of a lever situated to the right of the stylish steering wheel and changing the wake’s characteristics is easily accomplished. Whether the skier or wake boarder is a veteran or a novice, the just-right shape of wake is just a finger touch away.

Like a powerful sports car or a race replica motorcycle, this craft is instantly responsive, with a taut feel that inspires confidence at the helm and makes driving it both easy and immensely pleasurable. This isn’t a boat that you would want to share ownership in, as you and your co-owner would be fighting to be the one behind the wheel. And when the kids yell “Hey Dad, can we go out again? Can we, huh?” You’ll happily put down your drink and jump in behind the wheel for one last spin before dark.