Rockin’ at The Rocks 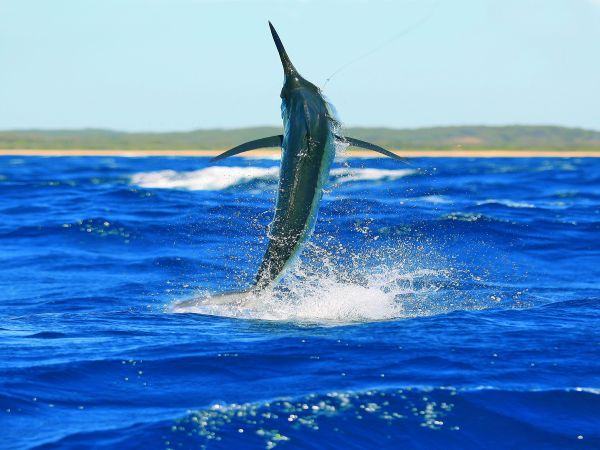 It had been a frustrating morning. We only caught one cobia and had yet to see a marlin. Even though we were fishing just 15 minutes from the ramp, most of the other boats had long since given up, leaving us alone.

With Vic Levitt kicking the Honda in and out of gear, we were slow-trolling a live slimy mackerel around the prolific bait schools, with our Strikecam underwater camera keeping an electronic eye on things. Trolling livies is a peaceful style of fishing and as we worked the bait I glanced towards shore, where I could see the tourists strolling around the ruins of the old historic jail on the headland. There really are few places in the world where you can fish for marlin so close to shore.

The tide change was barely an hour away and as we came into the strike zone, our confidence started to rise as the bait started to form up. On the Furuno sounder, it had been spread out all day, but now it was becoming more dense and going red on the screen. Something was obviously about to happen.

With increasing excitement, we watched the lines for signs of action. Then, without warning, the rod attached to Strikecam simply loaded up and started losing line. I had been watching the screen diligently all day and then finally, when we get the bite on camera, it’s the one moment when I glanced away.

Instead of racing to the rod, everyone on board crowded around the monitor, checking to see whether we’d captured the bite on camera. In the end, we caught the fish and then tallied another two before calling it a day and running home in just a few minutes.

Scoring multiple billfish in one day is impressive in anyone’s books. What really makes South West Rocks (SWR) stand out is that it’s done in shallow water, within a kilometre of shore. Believe it or not, some of the best fishing is literally right in front of the township. Adding further to the area’s appeal is the wide range of other species on offer. Besides marlin, there are sailfish, some of the biggest cobia in the country, swarms of mahi mahi, sensational kingy fishing and even big jews and flathead in the river. Put simply, there is always something worth catching at The Rocks.

SWR is a small town nestled between the Macleay River and the dominant Smoky Cape. The cape juts out to the east catching the East Australian Current (EAC) as it pushes down the coast. Every summer and autumn, when the EAC is at its strongest, pushing warm tropical water south, it catches on the Smoky Cape and eddies into Trial Bay.

It is here that the current collides with the mighty Macleay River, resulting in an incredibly rich feeding ground. Such a fertile environment acts like a natural magnet, drawing in tons of bait fish, especially slimies. So thick are the slimies at times that the schools are measured by the acre. At times, my Furuno sounder has been red from top to bottom, indicating thick schools of fish for miles on end.

Not surprisingly, this aquatic smorgasbord attracts a wide range of predators, including tuna, wahoo, cobia, sailfish, mackerel, sharks and – best of all – heaps of black marlin. I remember fishing a few years ago when the river flooded and the whole bay turned as brown as the Murray River. Unbelievably, we still caught several black marlin and sailfish. Despite the brown water on top, it remained clean and blue underneath and the fish were going off. The funny part was that the fish never jumped, so we never knew what we had on ‘til the very last minute, when they popped up beside the boat.

The best billfishing usually occurs in late summer and autumn, when the EAC is at it’s strongest. Although, thanks to the increasingly fickle currents, the fishing can be unpredictable at the best of times these days. When they are on the chew, though, you really have to make the most of it because you can expect as many as a dozen bites a day. Black marlin tend to dominate and can range in size from just 15kg, right through to 100 kilos at times. Unfortunately, the last few years have been a bit slow on the marlin front, but few anglers have complained since there have been huge numbers of cobia and sailfish to keep everyone entertained.

The best technique is undoubtedly slow-trolling livies on circles hooks. On Strikezone, I like to run three baits – two from the outriggers and one down deep with a breakaway sinker. The great thing about live baiting is that it is really easy and highly effective; all you have to do is keep the livies near the bait school and they will do the rest.

A good sounder is essential these days and allows you to find and monitor the bait schools. When it comes to techniques, all you need to remember is to stay on the bait. The trick is to slow troll upwind of the bait, then drift back through it, reversing up to hold position over it as long as possible. When you eventually drift off the bait, repeat the process and run back up for another drift. The basic rule I apply is that the moment the bait is off the sounder, I start heading back up. The bait is like a takeaway shop; if you aren’t at the counter, you won’t get served, so stay on the bait.

If the marlin fishing is slow on the inshore grounds, anglers can travel all of 12 nautical miles to the Continental Shelf to battle with monster blue marlin and mahi mahi during the summer, or big yellowfin in the winter.

There are also heaps of fish traps and FADs (Fish Aggregating Devices) dotting the offshore waters, which are a haven for mahi mahi. The easiest to locate is the Fisheries FAD (co-ordinates available from the local tackle shop). Although it gets a bit of pressure, it still produces lots of mahi mahi, including some big fish. One trick that works is to go exploring and find some fish traps or private FADs, which see less pressure and produce a lot more action. The best technique is drifting past and flicking unweighted live baits at the structure, although poppers and small metal slices, like Halco Twisties, are also worth a shot.

If marlin fishing isn’t your thing, there are heaps of other options on the cards. The legendary Fish Rock is reputedly one of the best kingfish spots in the State. Although misguided environmental activists have tried to lock anglers out, it is still accessible and a beautiful spot to fish. Copping the full force of the current, it really is a fishing haven and produces a wide range of species, from wahoo in the summer to big kings in the winter.

All this fishing so close to shore at SWR just sounds too good to be true, and to some extent it is. The downside – and it’s a serious one – is crossing the bar. The entrance to the Macleay is extremely shallow and, as a result, the swells can really stand up. It’s an unpredictable stretch of water that has claimed trailer boats and trawlers over the years. I have witnessed a few boats tipping as they attempted to cross the bar, so it’s definitely not for the faint-hearted.

Back Creek is marginally better, but with a very shallow entrance it’s usually limited to small trailer boats most of the time. If there is a northeasterly swell running, it can be impossible to navigate.

If you’re not confident, the best approach is to go out with one of the local charter boats to get a feel for how and where to cross the bar. When you do attempt it yourself, always do so on the flood tide, when the water is at its calmest. And always let someone else know where you are going. If in doubt, don’t go – a day’s fishing is not worth risking your life.

Actually, kingies are a year-round option at The Rock, although the bigger stump-pulling around for spotty mackerel. Every autumn, huge schools of spotties congregate in the area. A great light-tackle sportfish, they are highly aggressive and are easily caught by slow trolling small live baits or fishing dead baits in berley. But with razor sharp teeth, it’s worth using light, single-strand wire to prevent bite-offs. Occasionally, big Spanish mackerel and even cobia will turn up, so always have a heavier outfit ready for action if the pelagics are quiet. There’s also some great bottom fishing for species like snapper and jewfish.

The offshore fishing may hog the headlines, but the Macleay River itself offers some sensational fishing. A huge waterway, the Macleay has a lot to offer, from big flathead and jewfish to bream and even tropical intruders like giant trevally and mangrove jacks at times.

Any of the sand flats upstream of the boat ramp are worth spinning for flathead, while the mangrove-lined creeks, such as Spencer’s, are perfect for bream. To the west of the launching ramp, past Kemps Corner, is a deep channel that leads around the back of Shark Island into a maze of mangrove islands, sand flats and channels that would take days to explore. Silently stalking flats or probing the oyster leases with hard-bodied lures, like Tilsans and soft plastics, will produce just about anything from a trevally to a monster flathead.

One of the most productive spots in the river is down around the mouth. With man-made rock walls lining both banks, it’s an excellent spot for both boat- and land-based fishing. This is a prime spot for jewfish, including some real stompers over 30 kilos.

What really makes SWR so appealing to trailer boat anglers is that the fishing is mostly confined to a small area and there is no need to travel far from shore in most cases to get into the action. As a result, there is no need for a big expensive boat and high fuel costs, which inhibit so many small boat anglers from getting to the best fishing spots. SWR is one of the few places in Australia where it is possible to catch a marlin from a tinny or a monster jewfish from the shore. What more can you ask for in a fishing destination?

For some exciting fishing action at SWR, check out the Strikezone Live Baiting DVD. You can ring toll-free on 1800 025 785.

Overlooking Trial Bay, South West Rocks (SWR) is a small, sleepy , sea side village squashed in between the Hat Head National Park and the mighty Macleay River. For the sport fisherman, there is something to suit all tastes, while non-fishers can relax on the white sandy beaches or explore the historic Trial Bay Gaol. For general information, check out: www.northcoast-nsw.com.au.

For those who want to fly, you can land at either Coffs Harbour, about an hour north, or Port Macquarie, which is about 40 minutes to the south.

The winter months are cool and calm, with the occasional southerly front to disrupt things. Spring is typically unsettled. By summer, the temperature has increased to a pleasant 25 to 30 degrees, but the northeasterly breezes are standard in the afternoon. Autumn is the best month, with warm weather and calm seas most of the time and, most importantly, hot fishing.

Being a tourist town, SWR is well set up for the visitor, with supermarkets and restaurants to suit most tastes. There is a variety of budget-priced accommodation, from motels to caravan parks. Coffs Harbour, a short drive north, is a popular tourist destination and has a lot of shopping opportunities for the non-fisherman.