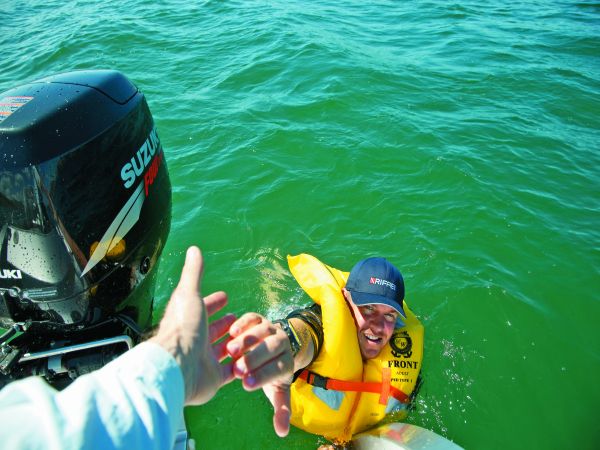 Pic: Scott Amon
People falling off boats account for a significant number of fatalities around Australia every year.

The wind is blowing and the waves are rising as you decide to head back in at the end of a good day’s fishing. Everything is stowed ready to head off, and you are soon on your way. Trying to stay ahead of the weather, the skipper lifts the pace. It’s then you notice that the berley bag is bouncing around in the wake behind the boat. You move to retrieve it and just as you reach out to drag in the line, the boat bounces off a large wave. You lose your footing and you’re suddenly in the air, but only for an instant. The impact and shock of the frigid water knocks the breath out of you. Struggling to the surface, you gasp for a moment or two and then yell for help at the fast disappearing stern of the boat. Your fate is now dependant on the reactions of your crewmates.

‘Man Overboard’ (MOB) incidents happen far more often than most people think, with loss of life an all-too-frequent result. In a recent five-year study, 15 per cent of MOB incidents requiring rescue assistance from volunteer or professional organisations were from recreational power craft, while 18 per cent were from sailing pleasure craft. The rest were from fishing vessels and commercial shipping.

The picture is even more serious when you factor in fatalities. According to a report issued by the South Australian Department of Transport on recreational boating incidents, “… most boating fatalities happen when people fall overboard, even in calm waters close to shore”.

Obviously, prevention is the best cure. When underway, cockpit decks should be kept clear of tripping hazards at all times. All crew, especially first-timers, should be briefed on where to stand or sit while the boat is underway. Standing or riding on the gunwales, bow or transom should be avoided if at all possible. If people must move around in a boat that is on the move, they should stay low, hold on with both hands and have at least three points of contact with the boat at all times.

A strong case can also be made for wearing personal flotation devices whilst underway, especially in rough seas or at night. In fact, some kind of floatation device should always be kept within easy reach of the helm. This can be a lifebuoy, PFD or even a fender – but in any case the faster you can throw something with floatation capabilities to the person in the water, the better. And even better if it is fitted with reflective tape, as it may mean the difference between recovery and drowning if the incident occurs at night. On GP-Sequipped craft, the Man Overboard function should be employed to mark the spot where the person fell into the water.

As soon as people are aware that someone has fallen overboard, a crew person should be nominated to keep the person in sight at all times and keep pointing at them. This way the skipper will be aware of their location throughout the recovery, particularly if they have to manoeuvre the boat through difficult seas.

It is also worthwhile, depending on conditions, to consider alerting rescue authorities or other boats in the vicinity via the radio. If weather or visibility are issues, making sure other boats understand the situation can only be a good thing.

Once located, the MOB should be approached from down wind or down current, with the vessel heading into the waves. This allows for better directional control of the boat, especially when close to the ‘swimmer’. Once close enough, throw them a length of line, making sure that it is securely attached to a strong point on the boat. Ideally, the line should have a loop in the end being thrown so it can be used as a ‘stirrup’ to allow the person being rescued to step up into the boat.

The motor should be switched off to avoid propeller injury when close and the person should then be retrieved by the most convenient and safest means possible, so as to avoid anyone else falling into the water. On smaller boats, such as dinghies, retrieving people from the sides should be avoided to prevent the possibility of capsize.

It needs to be kept in mind that anyone in the water is likely to weigh considerably more if they are fully clothed and will thus need more effort to get back into the boat. It can be even harder if the person is injured, elderly or overweight. Ideally, all craft should be equipped with some form of ladder, either transom-mounted or stowed, to cope with a worst-case scenario, such as having an adult in the water, possibly injured, with a child or frail adult left alone on board.

Once retrieved, the victim should be treated for any injuries, but particularly for hypothermia, which can be dangerous if not recognised. They should be kept warm, dry and out of the wind and returned to shore as soon as possible if they show any signs of injury or illness.

Man Overboard drills should become a regular component of recreational boating so that in the event of a crew member falling overboard, the correct procedure can be swiftly followed.

1. It’s a calm day and this crew member sees no harm in sitting on the gunwale for a drink.

2. However, his hat suddenly blows off and he tumbles overboard while trying to retrieve it.

3. A crew member alerts all aboard by calling out “Man overboard!”, while keeping her eyes on the person in the water as well as pointing out his location. If possible, a life ring or other floatation device should be deployed as soon as possible.

4. The skipper immediately checks his course so that he can steer a reciprocal course back to the person in the water.

5. Even on a calm day, a person in the water can be hard to spot. The MOB should keep his hand aloft so he can be easily seen.

6. The skipper steers his craft back to the MOB and approaches him slowly, making sure to keep the vessel into the wind. Once the craft is close enough, a flotation device attached to a line is thrown to him. Once he has hold of it, the skipper cuts the engine completely to avoid any chance of injury from the propeller.

7. The MOB is now pulled gently to the boat.

8. The MOB is given a helping hand to reboard the vessel. The MOB may be suffering from shock, hypothermia or both, and appropriate first-aid measures should be taken.

1. Deploy a life ring or other floatation device as soon as possible.

2. Immediately appoint a crew person to watch the person in the water and point out their position.

3. Start the engine and put the boat head-to-wind so as not to get too far away from the MOB.

4. Call all crew persons onto the deck to make sure everyone is aware of what’s going on.

5. Ensure the headsail is lowered and only the mainsail is deployed. The less sail out the better when attempting to recover an MOB.

6. Put the vessel into an “apparent” beam reach. Allow yourself some sea room to manoeuvre and get yourself organised to recover the person from the water.

7. Tack and sail on the opposite beam reach (the person in the water is now on the weather bow) from the water.

8. Approach on a close reach, easing the sheets in the final stages. Leeway will increase as you slow down – allow for this.

9. In a larger vessel, it is easier to come alongside to windward of the person in the water and make the recovery over the leeward side.

Should you find yourself in the water, there are survival techniques you can use while waiting to be picked up. Hopefully, you’re wearing a PFD

or you have been thrown a life ring or other floatation device. If not, you will have to float or tread water until rescued.

One method of floating is the horizontal back float. This comfortable position keeps your face out of the water and allows you to conserve energy. You simply lie back motionless with your arms outstretched, arching your back slightly and allowing your legs to rise to a horizontal position.

Another method of floating is the vertical back float. This position does not float your entire body on the water’s surface. Instead, your body is still underwater, except for your face and upper chest with your arms extended out to each side.

If you cannot float in this manner, you can practice ‘survival floating’. Very simply put, tilt your head back, slowly press down with your arms and legs to bring your mouth above the water, inhale, hold your breath and go limp for a few seconds. Your face will go underwater while you dangle your arms and legs. Then tilt your head back and out of the water and exhale. The benefit of this method is that it requires a minimum amount of energy to stay afloat.

It’s also important that, if you find yourself in the water, you keep your clothes on to help prevent heat loss. As clothing also tends to trap air, it can assist in keeping you afloat.