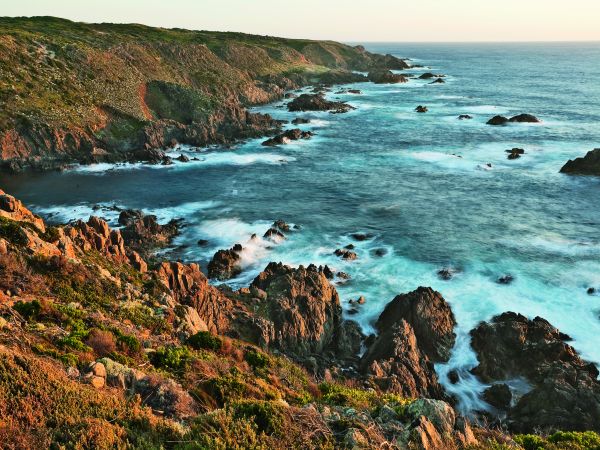 That such gentle flavours can be coaxed from within this natural ferocity seems almost a miracle Coastal cliffs at Seal Rocks State Reserve, King Island, Tasmania.
Beyond King Island’s ravaged coastline lies a treasure trove of sublime pleasures …

What most people know about Tasmania’s King Island they’ve probably picked up from supermarket shelves, where its premium cheeses, yoghurts, beef and bottled water promise a land of plenty. But Bass Strait’s second-largest island is a place that goes beyond the packaging, with its fertile farmlands rimmed by wild shores, cliffs, surf and shipwrecks.

Straddling the 40th parallel – the line of the notorious Roaring Forties – at the point where the Southern Ocean meets Bass Strait, the island is lashed by wind and fierce seas. More than 100 ships have been wrecked around its rugged coast, including the Cataraqui, on which 400 people died in 1845 in Australia’s worst peacetime maritime disaster. To underline its dangers, the southern he misphere’s tallest light house stands sentinel near the island’s northern tip, at Cape Wickham.

That such gentle flavours can be coaxed from within this natural ferocity seems almost a miracle, even if legend does credit the island’s gourmet ambitions to a shipwreck, with the lush grasses that carpet most of the island reputed to have sprouted from seeds washed up inside a sailor’s mattress.

Very little remains of the multitude of shipwrecks – only the boiler of the paddle steamer Shannon, which ran aground near Yellow Rock Beach in 1906, is visible from the shore – though a maritime trail runs from tip to toe of the island, recounting stories of the wrecks and the three lighthouses that have the island flickering like a mirror ball each night.

The 48m-high lighthouse at Cape Wickham, rising above the graves of crew members from the wrecked ships Neva and Loch Leven, was built in 1861, but often served only to confuse sailors, who mistook it for the lighthouse across Bass Strait on Victoria’s Cape Otway. Sailing south of the light, they’d slam up onto King Island’s rocky coast and reefs. In response, a lighthouse above Currie Harbour was built in 1879. Decommissioned in 1988, it was switched on again in 1995 after a campaign by islanders, making it one of the few lighthouses in the world to ever recommence operation.

Below the lighthouse, bunkered behind sand dunes, sits the island’s main town of Currie. Five wind turbines cartwheel at its back, producing almost half of the island’s power needs, and kelp strands as thick as arms hang to dry along the coast at Australia’s only kelp processing plant.

North of town – and seemingly almost as large as it – is the island racecourse where, uniquely, thoroughbreds and harness racers share the card at each of the seven summer race meetings.

That the name of the main town on this gourmet island should sound like a dinner seems prophetically appropriate, and it’s a short drive further north from the racecourse to King Island’s most prized foodie offering and its largest employer, the King Island Dairy. In the attached fromagerie, visitors can graze through samples of the dairy’s 30-plus specialty cheeses, compiling a picnic lunch best enjoyed at Lavinia State Reserve in the island’s northeast corner.

One of two state reserves on the island, Lavinia’s greatest natural treasure is Pennys Lagoon. This rare perched lake lies pooled above the water table in a similar way to those found on Queensland’s Fraser Island – and for islanders it’s the camping getaway of choice. Past the lagoon stretches Tasmania’s longest parallel sand dune system and beyond that is the one thing that rivals food as King Island’s headline act: the surf at Lavinia Beach.

The conditions that once drove ships aground on King Island now send surfers out into the sea – even at lunchtime at the dairy it’s not uncommon to see workers wandering down to nearby Porky Beach to catch a wave – and the break at Lavinia Beach was once ranked among the 10 best waves in the world by Surfing Life magazine. It has drawn world champions, such as Kelly Slater, Tom Carroll and Sunny Garcia to the island, while surf-loving Australian Chamber Orchestra artistic director Richard Tognetti has bought property near the beach. The wave, which is named Martha after a shipwreck, is fickle, being at its best only about once a fortnight. But it’s never crowded – in fact, on King Island there’s an unwritten rule that if somebody else is at a beach when you get there, you simply have to find another one.

King Island’s other state reserve – Seal Rocks – is at its opposite end, or about 80km away by road. This smaller reserve protects a 7000-year-old petrified forest and King Island’s highest cliffs, rising 60m above a fury of whitewater. These cliffs are the island’s most spectacular sight, especially at sunset when they rise strong and bronzed from the Southern Ocean, catching the last of the day’s light. Stand here and it doesn’t seem odd that the world’s first tow-in surfing championship was held nearby in 2000.

Driving back to Currie from Seal Rocks after sunset is a little like dodging a terrestrial meteor shower. The island is home to more than half a million wallabies – that’s roughly 300 times the human population – and on dusk every road is a traffic jam of marsupials, all hopping about like popcorn. Little wonder that half the local panel beater’s work comes from wallaby-damaged vehicles.

Back in town after dark, thoughts inevitably return to food. Though Currie is King Island’s largest town, the best eating options are found across the island in the tiny east-coast settlements of Naracoopa and Grassy. Though it’s just 25km shore to shore, the difference in the coasts is striking, with the rock-rimmed west coast yielding to long sandy beaches on the eastern side. The wind in the east is also often just a breath compared to the squalls on the west coast.

“This is the Gold Coast,” one Naracoopa resident assures me.

In Naracoopa, at the end of the evocatively-named Lovers Lane, is the excellent Rocky Glen Retreat, with three Alpine-style guest chalets and a fine restaurant staring out over Bass Strait. The produce in the restaurant comes mostly from Rocky Glen’s own garden, while the lobster is sourced from the local waters and the beef from the island’s farmers. In the pecking order of King Island food, beef ranks second only to the cheese. Around 20 per cent of Tasmania’s beef herd can be found on the island, and research shows that King Island’s premium beef now has the highest brand awareness of any beef in the country.

The other great dinner treat is south of Naracoopa in the curious town of Grassy. Until the early 1990s, when the local scheelite (a mineral) mine closed, Grassy was the island’s largest town, home at its peak to around 1300 people and, reputedly, it had the highest per-capita alcohol consumption in the country.

When the mine closed, Grassy virtually did, too. Only the resident muttonbirds and little penguins remained, with the human population plummeting to just four. That’s when Ian Johnson, a farmer from Orange, stepped in, becoming perhaps the only person in Australia to ever buy an entire town.

Today, as Johnson has slowly sold off the homes, keeping a few for use as accommodation in his King Island Holiday Village, the town’s population has recovered to around 120.

The muttonbirds and little penguins continue to come ashore, the former filling the skies on dusk each summer evening and the latter shuffling ashore on the breakwater, seemingly oblivious to any human presence – one night a passing penguin actually stepped on my foot as I crouched beside the path leading from the water.

Up in the town, amongst its five stores, Grassy also has the island’s only souvenir shop of sorts, the unique Kelp Craft, where kelp is harvested, cut, sewn and oven-dried into a menagerie of shapes such as wombats, leafy sea dragons, koalas and Loch Ness Monsters.

But the finest thing in Grassy is unquestionably the Kings Cuisine restaurant, offering the most regal way to end a day on King Island. Set in the unprepossessing RSL-like garb of the Grassy Club, the restaurant is run by Steve Russell, a one-time chef at renowned Victorian restaurants Grossi Florentino and Kosta’s. Local fare on the menu includes lobster (and its’ nemesis, octopus), plus produce from the island’s lone market garden near Currie. The lamb and beef come not just from the island, but from particularly selected farms.

If the food at Kings Cuisine is fine, the dining experience is casual, with its cafeteria-like tables set at one end of the club front bar, making for an experience that feels very in tune with the ways of this island, where harsh conditions yield the finest of foods.