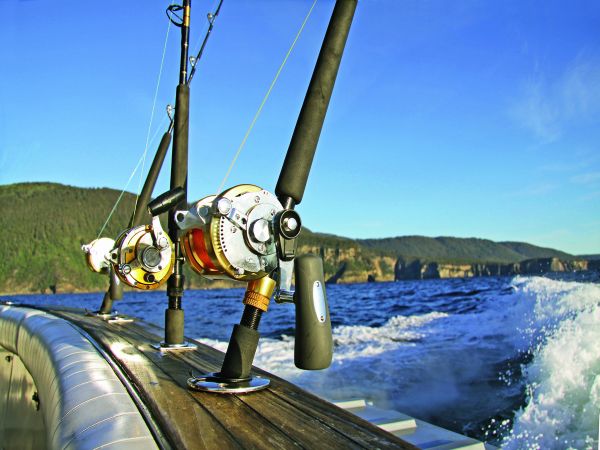 If a boat’s chances of success in a fishing tournament are measured solely by the amount of fishing tackle on board, then the opposition – and the fish – didn’t stand a chance. Surrounding me in the saloon was a veritable tackle shop full of lures of all shapes, sizes and colours. Boxes upon boxes of cunningly-conceived fish-hooking devices were piled up in front of me as I attempted to find a spot to stash my gear. Whether we were out to wrestle whales or tangle with tuna, there seemed a lure to match every eventuality.

I was on board Diversion, a 47ft Ranger flybridge cruiser, as a guest of skipper, Steve Soul. Joining us was an experienced local crew comprising Steve’s son, Brock, plus long-time mates Rod ‘Cookie’ Cook and Shane Heddle. Our mission was to compete in the Club Marine 7th Tom Jenkins Memorial Bluefin Tuna Contest, run by the Tuna Club of Tasmania. The club is based at Pirates Bay, one hour by road from Hobart near the small town of Eaglehawk Neck on Tasmania’s lower east coast. The tournament also marked the club’s 50th anniversary, and a good turnout of 54 teams had assembled to celebrate the milestone.

It was early May and the forecast encouraged us to think that the next two days would see a few fish at the back of the boat. The day before I arrived, the crew had fished the local waters to see what was about. Generally, at this time of year, the south-eastern end of Tasmania sees a good run of southern bluefin tuna as they wind their way around the bottom of the island and head north up the east coast of Australia. The annual migration normally results in some fish of over 100kg being caught and Brock had already boated an 85kg, rod-busting whopper, as well as a slightly smaller fish, a day earlier.

Seas were to be relatively mild for this part of the world – light winds fanning anything from 2-3m swells, while the weather forecast was for warm and dry conditions. So, it was game on …

The night before I had been warmly welcomed by club officials and the club rooms were packed with entrants keen to get out on the water for the following two days of competition.

As we supped soothing ales in Diversion’s cockpit on the balmy Thursday evening before the contest, I had visions of giant tuna bending rods and straining backs as the age-old fight between man and beast unfolded. Steve heightened my anticipation by adding that “we only bring out the gamechair after the first two hours of the fight”. So, any battles would be fought standing up – as it should be – with fish and angler on equal terms.

With the sun barely peeping over the horizon the following morning, the fleet assembled in the sheltered confines of Pirates Bay ready for the traditional sail past and tournament start. I have to say that, based on the waters we’d be fishing and the area’s reputation for boat-breaking conditions, I was impressed by the number of smaller trailerable craft assembled before us. Large flybridge boats were definitely in the minority as smaller boats of all makes and models bristled with fish-fighting gear up to – and sometimes over – the gunwales. And the crews were all absolutely chomping at the bit to get their lines in the water. It would be difficult to find a hardier – and keener – bunch of fishos at any tournament on the mainland.

As the fleet was released over the radio by the organisers, boats fanned out in a flurry of wakes as teams rushed to get to their favoured spots further down the coast.

One of the attractions of this particular tournament, as I’d been told earlier, was that generally boats don’t have to travel too far to be on the fish. The continental shelf is only a few kilometres offshore, while large tuna tend to be attracted close to land in the area, so most boats stay within 10 or 15km of Pirates Bay.

We headed directly south to begin with, a total of eight serious game rigs soon humming expectantly as lures danced in our wake.

With the big Caterpillars throbbing lazily beneath the deck, Diversion brushed aside the swell as we skirted the massive basalt cliffs that define the south-eastern tip of Tasman Peninsula. While I was still coming to grips with the majesty of the dramatic, volcanically-formed rock formations that thrust up from the ocean, we rounded Cape Pillar and the monolith that is Tasman Island hove into view. I spent the next two days attempting to capture on camera the sheer scenic wonderland that this remote part of Tasmania presents to the world.

Tasman Island stands like a mediaeval fortress overlooking the Southern Ocean, the next port of call heading south being Antarctica. High atop its rocky escarpments is a silent sentinel beaming out a warning to skippers to stay clear. The lighthouse – at 276m one of the highest in Australia – was built early last century and was known amongst lighthouse keepers at the time as one of the more windswept and isolated assignments. The light was automated in 1976 and it remains as a lonely beacon to mariners who navigate the area.

As we skirted the rocks attempting to entice a tuna to our lures, another local feature became apparent – and one not all that popular with tournament contestants. Australian fur seals populate the area in growing numbers, exploiting every rock ledge and crevice on the mainland and nearby islands, including Tasman Island and the Hippolyte Rocks, to sun themselves during the day. Judging from radio reports I heard over the weekend, the seals also plainly enjoy making mischief and taking sustenance from anglers at every opportunity. Not only did fishos have to contend with battling often large and reluctant fish, they also had to deal with seals menacing their pelagic protagonists as they rushed to get their catches to the boat before they became dinner for the local mammalian life. It certainly added another element to the contest, as any fish exhibiting evidence of an encounter with a local seal was deemed ineligible to be weighed in the tournament.

Anglers were appeased to some extent by word that one boat witnessed a gruesome encounter between a large white pointer shark and a hapless seal in which the seal came out the loser – and in two pieces. It was a sobering reminder that we were mere visitors to the area and that the food chain remained uninterrupted by our presence.

Now, while it is almost compulsory for an article about a fishing tournament to contain graphic descriptions of epic battles with giant fish, sadly you will not read such drama-filled accounts here. Despite two solid days of dragging lures through every imaginable bit of water between us and Antarctica, we had barely a nibble. To be fair, we did bring a couple of fair-sized albacore to the boat, but the targeted bluefin remained frustratingly elusive – at least for the crew of Diversion.

Nevertheless, other teams enjoyed more success, with the winning fish being a 90.5kg muscle-bound bluefin landed by Justin Baker off Polfish. There were also numerous other fish of comparable size reported and many tag and release encounters recorded.

After my first visit to the area, I was left with an overriding sense of the magnificent natural features that abound on and around the Tasman Peninsula. From the amazing rock formations to the sheltered bays and wildlife that inhabit the area, it is certainly somewhere that I hope to return to in the future. Hopefully, I will also be able to regale readers with tall tales of titanic tuna and other angling exploits.

In the meantime, special thanks to the Tuna Club of Tasmania for being warm and welcoming hosts during our visit and for completing a successful 50 years of angling competition. Also, I must thank Louise Drysdale for generously supplying accommodation. If you are contemplating visiting the area, I can highly recommend staying at her well-appointed and aptly-named Lazy Days beach house, tel 0410 042 538.