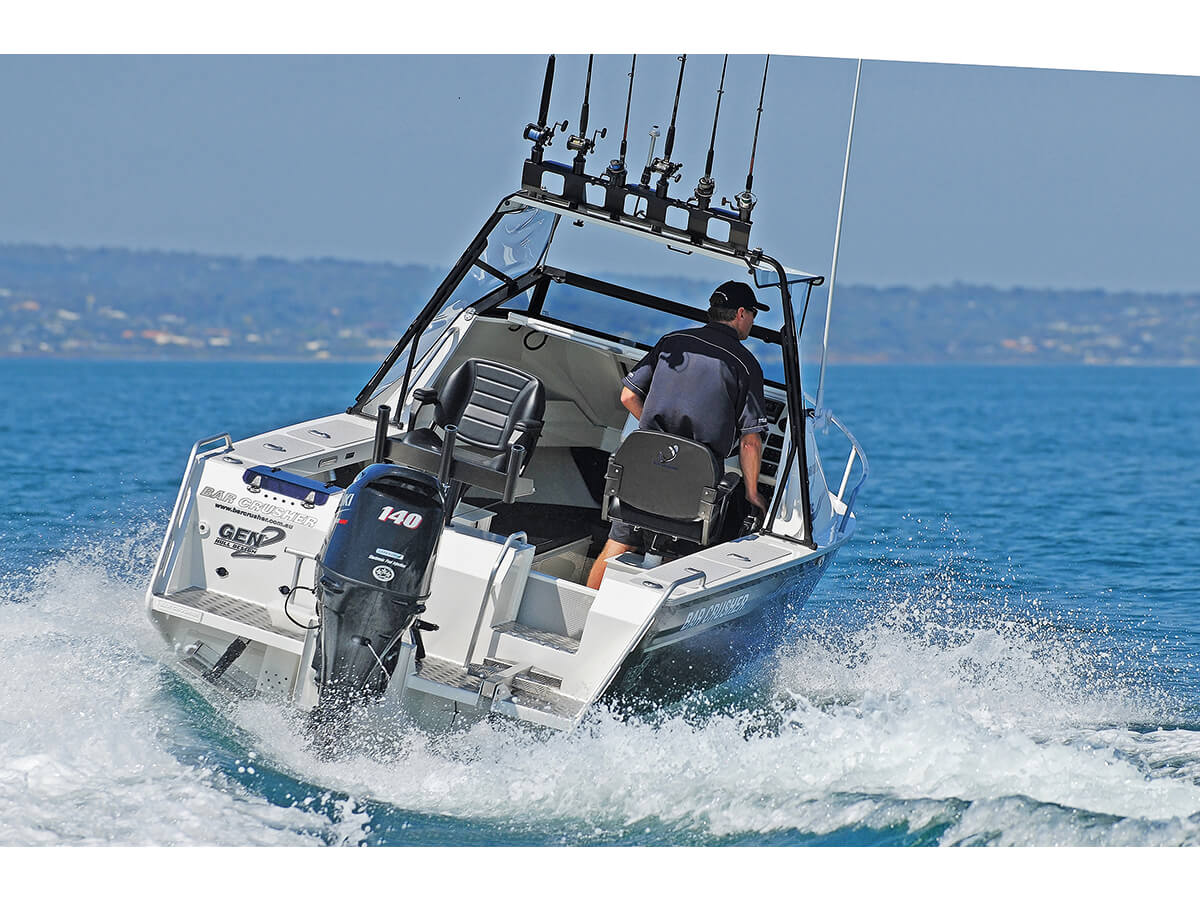 Bar Crusher has massaged its tried and tested hull to come up with a new family-friendly cuddy cabin.

Melbourne-based manufacturer Bar Crusher has earned itself a well-deserved reputation for its on-going efforts to upgrade, redesign and tweak its already popular model lines.

The most recent alterations emanating from its R&D department have resulted in the debut of the Bar Crusher 615C Gen2 cuddy cabin, a new model that underlines Bar Crusher’s tendency to think outside the square.

One of the dramatic changes to the Bar Crusher hull of old is the inclusion of a ‘Delta Flare’. Delta Flare is incorporated into the 615C hull in the form of a ‘V’ pressing each side, close to the keel line. The V runs from the stern about three-quarters of the way forward, tapering into the form of the hull as it approaches the bow. The theory is that water is trapped in the V rib, creating pressure under the hull and resulting in a quicker and smoother transition to plane and increased high-speed stability. Reduced side slip in tight turns at speed is another plus.

The chines running forward have also been widened and given a slight negative rake, resulting in increased stability at rest.

The Delta Flare is a bonus to the inherent stability offered by the flooding keel, which has long been a trademark of Bar Crusher boats. It is also a feature on most ocean-going trawlers – craft that, more than most, depend on stability when going about their business.

Bar Crusher also has a reputation for building tough boats with strong hulls. Typically, most hulls feature 4mm bottoms and 3mm sides, with 4mm alloy checkerplate decks. Below the cockpit floor Bar Crushers are strengthened by one of the most comprehensive substructures of any trailerboat on the market. You can take it from me, there is enough aluminium under the deck to build another boat, albeit a small one.

The 150lt fuel tank runs longitudinally down the centre of the underdeck and there is an option to expand its capacity by 55lt.

Buoyancy comes from two sealed and pressure-tested voids each side of the fuel tank, with a generously proportioned 800mm long x 550mm wide x 170mm deep kill tank incorporated under the deck.

The twin batteries are located centrally in the transom bulkhead and are controlled by easily reached isolator switches. An aluminium rear lounge folds up when not in use.

The top inside edge of the bulkhead is padded for angler comfort and the bait-rigging station is a lift-out design, allowing for the installation of a ski pole in its place.

The coamings on the 615C are wide and clad on top with rubber non-slip sheets so loading gear over the gunwales won’t knock the paintwork around too much. The side pockets are also large, with plenty of room for gaffs, tag poles and the like.

The swivelling seats boast sturdy synthetic frames fitted with bottom and back cushions and are adjustable fore and aft. They are mounted on boxes that each contain five tackle trays.

Footrests are placed handily for bracing when the going gets rough.

The helm station has two fascias with the wheel on the lower and Garmin instrumentation and Raymarine’s Hybrid Touch combination unit on the upper. All were installed at a comfortable level and easy to access.

Another aspect of Bar Crusher’s design is its folddown hard-top superstructure to allow for low garage roofs. It’s also a bonus when towing over long distances, as the reduced wind resistance means considerably lower fuel consumption. The front screen is also hinged for lowering when underway.

At a squeeze, the cabin could sleep two small adults, with the inclusion of a leg well infill. There is stowage underneath the cushions and a step helps when accessing the cabin roof hatch to launch or retrieve the ground tackle. A mounting for a Stress Free electric anchor winch is standard fitment. The usual cabin side pockets provide extra storage for nick-nacks.

On the day of the review, Melbourne’s Port Philip Bay was uncharacteristically glassed out, with barely a puff of breeze. That would have been great if we had the optional ski pole fitted, but as far as rough-water handling went, our only option was to run over our own wash. The calm water did at least give us the opportunity to wring out the most from the new ‘A’ series 140hp Suzuki.

Most noticeable, though, was how this new hull slid effortlessly onto the plane, and with a flat attitude throughout the transition. The Delta Flare was obviously doing its job very well. It seemed to be working in the cornering department, too. High-speed tight turns were not an issue, and stability at rest was excellent. The 615C ticked all the right boxes on the water.

Those searching for an aluminium boat for all seasons need look no further. The new 615C, with its Gen2 hull, is more than capable of handling a family fun day or going in search of big fish out on the Shelf. And it does so while still offering great value for money, with typically healthy Bar Crusher resale value as a welcome bonus.