The roosters of La Paz 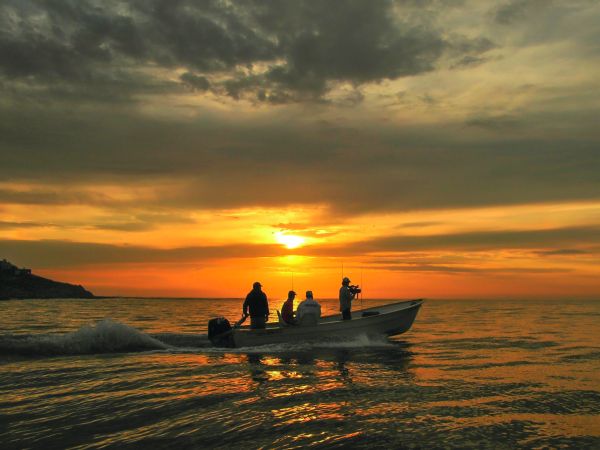 The roosterfish was as elusive as the promised warm, clear-sky Cabo weather
Paul Worsteling wrestles the spectacular, but elusive roosterfish in the waters of Mexico.

The crow of the rooster that awoke me signified the start of a journey that would take me to the other side of the world, but it was a different type of rooster that was on my mind. My destination was Cabo San Lucas, or ‘Cabo’ as it is often referred to, a city at the southern tip of the Baja California peninsula in the Mexican state of Baja California Sur.

Cabo has a tropical desert climate with an average temperature of 33.2°C for the month of July … a far cry from our cold Melbourne winter. Cabo’s warm, 24°C waters are rich in game fish and host the highest-paying marlin tournament in the world, the Bisbee’s Black and Blue Marlin Jackpot Tournament. This annual competition is described as the ‘Super Bowl of Billfishing’ and sees the best teams in the world compete for a prize purse of over US$4m.

This trip was 18 months in the planning – sourcing guides, studying weather patterns, organising travel arrangements, booking hotels, cameramen, guides, charter captains, and researching my next fishing conquest. After a 14-hour flight to Los Angeles, a two-hour flight to San Jose, followed by an hour’s drive to Cabo, I entered the foyer of the hotel to find ‘The Griz’ waiting for me.

Mike ‘The Griz’ Ritz, host of Adventures South of the Boarder (a popular American fishing show he hosts with son Charlie) has fished these waters for 30 years and describes himself as looking like Santa crossed with Grizzly Adams. Full of excitement, he sat me down and formulated a plan in typical American style for our quest to catch the mighty roosterfish.

A popular game fish, the roosterfish is distinguished by its ‘rooster comb’ – seven long, feather-like spines of the dorsal fin. It can reach over 1.6m in length and weigh over 60kg, but the average fish caught by recreational anglers is around 9kg to 13kg. These thoughts helped me bounce out of bed for the trip to Cabo Marina early the following morning.

We boarded our boat E-Ticket, a 34ft Luhrs diesel, as the night slowly gave way to reveal a cloud-covered morning more like I was accustomed to from home.

We caught our bait using the ‘handshake’ method within minutes of leaving the marina. This involves local commercial fisherman catching fresh bait early in the morning from their pangas (small local fishing boats) and selling it to charter vessels leaving the marina. Some interesting communication took place (my Spanish only extends to singing La Bamba) and after an exchange of 100 pesos for 10 baits, we were on our way. I’m still not sure if I got a good deal or a bad one. How much is 100 pesos again?

As we left the marina we passed the Window to the Pacific and the famous Arch of Cabo San Lucas. This is an iconic landmark, which separates the Sea of Cortez from the Pacific Ocean and marks the entrance to some serious fishing country.

The diesel engines slowed after a 40-minute run to the mark. We were still close to the luxury-hotel-peppered shoreline when we began trolling our live baits parallel to the shore. I was told to look for the erect comb of the roosterfish. This unique feature can stand out of the water prominently when it’s excited and hunting for prey. I didn’t blink for hours while intensely searching the water’s surface.

The highlight of the day came when we were joined by a huge pod of dolphins numbering in the hundreds, maybe thousands. I have spent a lot of time at sea and have never seen so many dolphins and never had them stay with us for so long. It was an unforgettable experience. Dolphins and whales are like fireworks; you can never get enough, no matter how many times you see them.

The roosterfish was as elusive as the promised warm, clear-sky Cabo weather. Time rolled on and the weather rolled in. As the rain started, our captain and The Griz bemusedly shrugged their shoulders, saying they hadn’t had rain for a year and a half.

Another hour passed and, with the call from the coast guard ordering all boats back to the marina, the realisation that my rooster dreams were not going to be fulfilled that day hit hard. An unseasonal hurricane was fast approaching and would hit Cabo within 12 hours. The marina would be closed for a day or two for safety reasons, possibly meaning our fishing was over. I was shattered. I had come too far and planned too much for my dream to end there.

Prepared for everything, The Griz, in his deep, measured voice, assuredly said “Don’t worry, we’ll get you your roosterfish.” The tension of not being able to fish suddenly eased and our next adventure began.

We drove to The Griz’s fishing backyard: La Paz, a small township about 320km north of Cabo. The road trip took us past the Hotel California, made famous by The Eagles’ song. It was impossible not to sing a few bars as we entered the foyer. We had a look at Room 5, which hasn’t been slept in for over two years. Why? Well, it’s haunted. Every guest who has stayed in it has woken in the middle of the night to see a young woman sitting at the dresser, combing her long red hair. That room certainly was spooky.

Pangas are open, outboard-powered local fishing boats that the Punta Arena area just out of La Paz is famous for. The Griz had lined up two pangas and two local guides at short notice. He assured me that these boys were the best in the business and I could tell at a glance they were old salts.

The first few hours were devoted to bait collection, which involved spin casting with nothing except a running sinker down to a bare hook … a bit different to the way we do things in Oz. We fished among the commercial fishermen on a small reef not far from the ramp. Bait was tough and we got just enough to get us fishing. These were then put into the livewell (a couple of buckets of water dumped between the bow and the front bench seat of the panga) and our rooster mission was off and running again.

There was a stark difference in weather this day, with temperatures pushing a pleasant 42°C, but our captain and The Griz still weren’t happy. The Griz translated what the captain said (not that he talked much) and the conversation mostly centred on the water clarity and temperature, or lack thereof. The hurricane had pushed up a lot of dirty, cold, green water and the usually 24°C water measured only about 17°C, shutting down the system somewhat, so we were in for another long, hard day. After eight hours of hardcore fishing, not one rooster had been sighted, let alone bitten.

Even so, it wasn’t hard to stay upbeat. After all, I was fishing in Mexico and taking breaks from focusing on the rod tip to the point of eye exhaustion (if there is such a thing) to admire the cascading, cactus-covered mountain backdrop.

“If it’s going to happen it will happen at 2pm,” was the booming message that reverberated from the depths of The Griz’s larynx just as it ticked over 2pm. I knew we were in the best hands and that The Griz knew his stuff and, right on cue, my bait started getting twitchy. It was pulling short amounts of line off the reel, obviously a little nervous about something it had seen. The hairs on the back of my neck sprang to attention and my heart started racing – could this be it?

I picked up the rod, reconfirming with Griz the hook-up method: “Let it run before a solid smooth strike,” he instructed. Line started to disappear and in a dream-like state I instinctively and slowly slid the lever toward the strike position and felt weight for the first time. “Fish on!” came the call from The Griz, which echoed across the water and still echoes in my head today. The fish jumped and The Griz followed with a mighty call: “It’s a rooster, cock-a-doodle-dooooooo!”

The power of this fish was amazing, effortlessly pulling line with every tail thrust. It took us in circles around the panga and launched repeatedly out of the water. After a serious 15-minute battle, the last three metres of which felt like a mile, I met my first roosterfish – an incredible moment I will never forget. The green colours between its stripes blended with the water’s colour and the seven feather-like spines tickled my face while taking the photos. These fish are special; very few anglers have ever heard of them let alone been fortunate enough to hold one. After our short time together, the rooster gave us an adios with a beautiful display of its dorsal spines before slowly swimming off. I reckon it was thinking: “That bloke talks a bit funny …”

I showed my gratitude to The Griz in typical Aussie fashion with a big man-hug. We had achieved our goal, but “let’s try for another one” was the call. Pumped, our baits were soon working hard to find another rooster and it didn’t take long.

The adrenalin was still flowing and our story renditions were not yet fully told when the ratchet starting clicking over, silencing us all instantly. We looked at each other and, unbelievably, after days of nothing, the rod tip started bouncing again. Everyone sprang into action. With a megaphone-like “fish on” call from The Griz, the battle with my second rooster began.

This time, the scream of the reel was more violent, with rapid bursts of line disappearing from the reel. This was a bigger fish, with the strength to match. With a couple of beats from the tuna-like tail, 30m was covered and the fish was out of sight in an instant. It had stamina, strength and a bag full of tricks. I fought hard, too. From deep, direct runs under the boat, shallow darts cutting the water in half, it would jump and then circle the boat, remarkably all seemingly effortlessly.

Getting this fish in the boat was not going to happen. It was 30kg of muscle. I held it boat-side several times, but I just couldn’t grasp its tail wrist with both hands. The Griz was not keen to bring it onboard as they ‘go nuts’, hurting anglers and, more importantly, damaging themselves. I just wanted to get a solid grip to give everyone a better look at this mighty fish, but it wasn’t to be. On my fourth or maybe fifth attempt to get a grip, the fish powered off again and broke the line.

We returned the next day to an amazing sunrise, but nil results, even struggling to catch baitfish, and pulled the pin in the late afternoon feeling a little flat and very tired. As they say, that’s why they call it fishing and not catching.