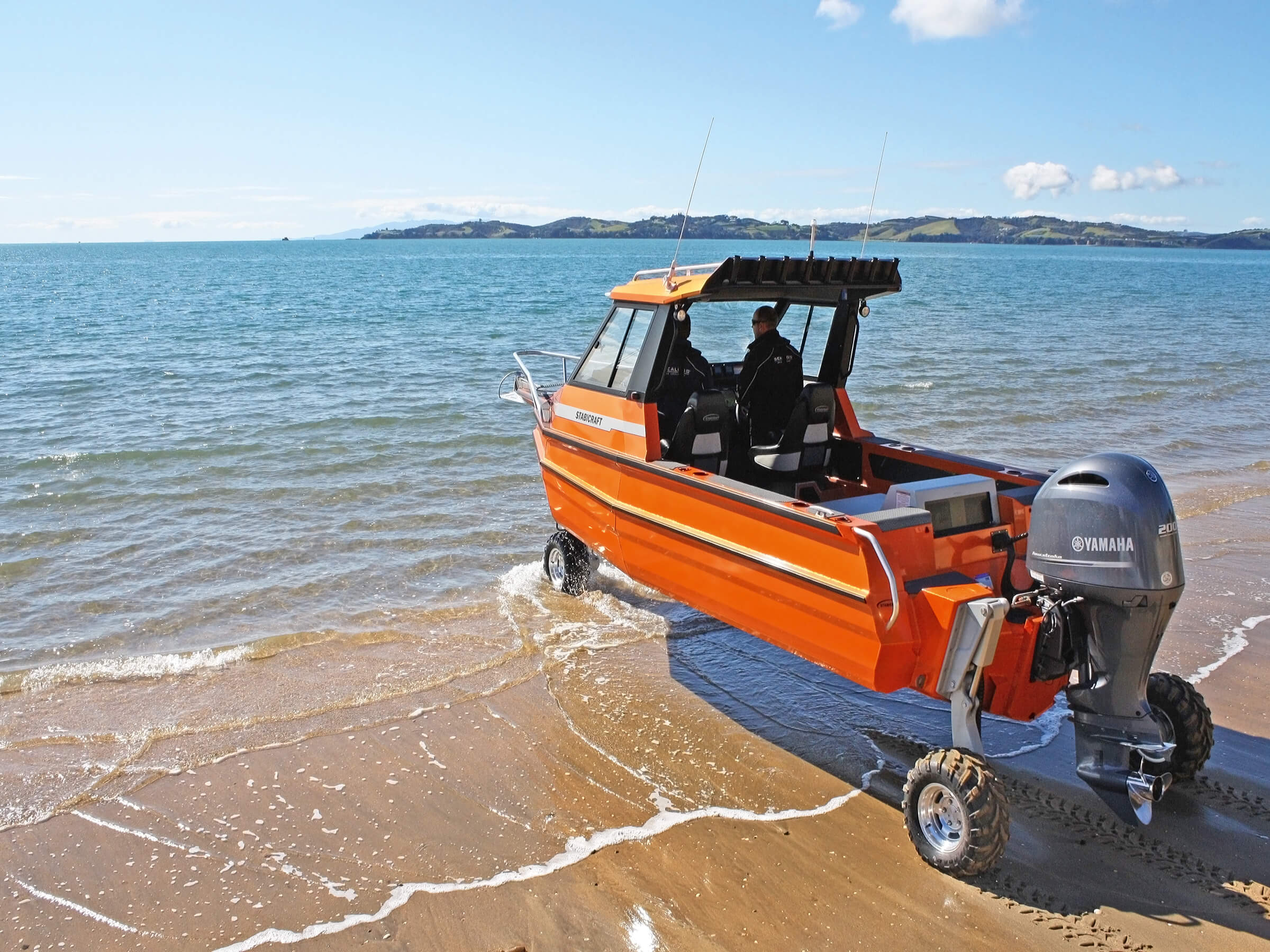 … the kind of vessel that will allow you to go anywhere, accessing remote areas of coastline and exploring the terrain.
Add Sealegs’s amphibious technology to Stabicraft’s renowned hull and you get a one of-a-kind Kiwi craft – the Stabicraft 2100 Supercab ST.

While Kiwi amphibious boat builder Sealegs generally produces its own models, all available with its motorised wheel technology, a number of vessel manufacturers have chosen to partner with the company to develop their own go-anywhere models. The integration of Sealegs’s retractable wheel system on a Stabicraft 2100 Supercab ST (Sealegs Technology) model is a joint project between Kiwi alloy boat builder Stabicraft and Sealegs, and represents the start of a whole new market for both boat builders.

The Sealegs amphibious system includes powerful motorised wheels that are powered by an inboard 22hp Honda-driven hydraulic power pack, which gives the user a variable on-land speed of up to 7km/h (forward and reverse). Essentially, it allows the Stabicraft 2100 Supercab ST to be driven from a storage location, down a boat ramp or beach and into the water – with the occupants staying in the boat and remaining completely dry.

Sealegs is about to celebrate 10 years in the market and will shortly produce its 1000th all-terrain boat. Meanwhile, the 2100 Supercab ST has been available in New Zealand for almost a year now, with 10 built to date. The first Aussie model is due to arrive in Australia shortly and will be on show at the Club Marine Mandurah Boat Show in October.

According to Sealegs Sales Manager Damon Jolliffe, the design and production of the boat was an exciting prospect for Sealegs.

“The 2100 Supercab has been one of Stabicraft’s most popular models for almost 10 years due to its inherent stability and safety features that are core attributes of every Stabicraft,” Jolliffe says. “We see the 2100 Supercab ST as being a real adventurer – the kind of vessel that will allow you to go anywhere, accessing remote areas of coastline and exploring the terrain. What’s more, it’s roomy enough to take all the gear you need, whether that be for the ultimate fishing adventure or an extended trip into the wilderness.”

Adventure is certainly correct. I can picture this kind of set-up venturing around the remote coastal areas of Australia’s Northern Territory, and then up onto land to set up camp for a night or two. Imagine camping on the beach with the comfort of knowing your boat is safely parked up next to you and not moored out in the tide …

I still find the sight of a boat driving out of the water and onto a beach weird, but it’s so cool! Sealegs can supply their vessels with specially designed trailers, which allows you to lower the wheels on the trailer and drive it off in the car park. You’ll never have to use a boat ramp in the traditional sense again … goodbye ramp queues!

The whole system is well designed, and I was very surprised as to how effortlessly the 2100 Supercab ST climbed out of the water, and what gradients it could tackle.

Like all Stabicrafts, this one has been designed tough with safety as the foremost consideration. Constructed of marine-grade alloy and utilising Stabicraft’s ‘life ring’ pontoon design, it’s durable, stable, spacious and ‘virtually unsinkable’.

Once aboard the 2100 Supercab ST, you soon realise that though it looks quite different externally, not a whole lot has changed internally. Despite having an engine cover situated aft in the cockpit (it houses the Honda engine for the Sealegs hydraulic system) the cockpit still feels large and spacious, with plenty of storage throughout. In fact, I felt the engine cover added something extra to the cockpit as another place to sit, and could be used as a table when at rest.

Large side pockets run each side of the cockpit and provide storage for extra rods, gaffs and equipment, and also house the wash-down hose system on the starboard side. Four rodholders are fixed into the coamings, two on each side, and further rod storage is available above in the rocket launcher.

In the aft corners, the rear seats fold up for access to the rear of the boat when angling, while twin boarding platforms either side of the outboard provide plenty of space for disembarking and reboarding after a dive.

At the helm and flush-mounted into the powder-coated dash is a 12in Lowrance fishfinder/ chartplotter display (future models will come standard with a 12in Simrad), which is connected to a small camera underneath the bowsprit, allowing the operator to view the forward wheel when navigating terrain.

As in other Stabicrafts, the company has done a lot of work in the ergonomics of not just the helm area, but also the rest of the boat. Everything is positioned correctly and just where it should be.

I’m a big fan of sliding side windows in hardtops as they’re quite a handy feature for poking your head out the side and surveying the terrain. Cantilever swivel seats for the skipper and passenger provide dry storage underneath while allowing easy wash-down and clean-up after a day on the water. I loved the seating configuration – the lift-up bolster-style seats are big and comfy, and give you something to lean against when underway or standing to drive.

A small step-over bulkhead divides the helm area from the forward cabin, which is configured in a traditional V-berth with squab infills and, while it is not massive, it does provide a great place to store gear. Stabicraft describes this area as the ‘dump zone’ or simply a place to retreat to out of the sun and for the kids to chill. Extra storage space is available under all three squabs and on side shelves.

The Yamaha F200 is a good match and delivers a great mix of out-of-the-hole punch, mid-range torque and top-end speed. In addition, it is quiet and returns excellent fuel economy.

Underway the ride is good – in fact, the extra weight of the Sealegs system makes the boat feel ultra-solid in the water, and I could feel that in rougher conditions the boat would excel.

I’ll have to admit, it is a strange sensation driving a boat on land but, once you get used to it, it becomes second nature.

What more can I say … it’s a Stabicraft that drives on land – it doesn’t get much cooler than that!