Soaking up the serenity 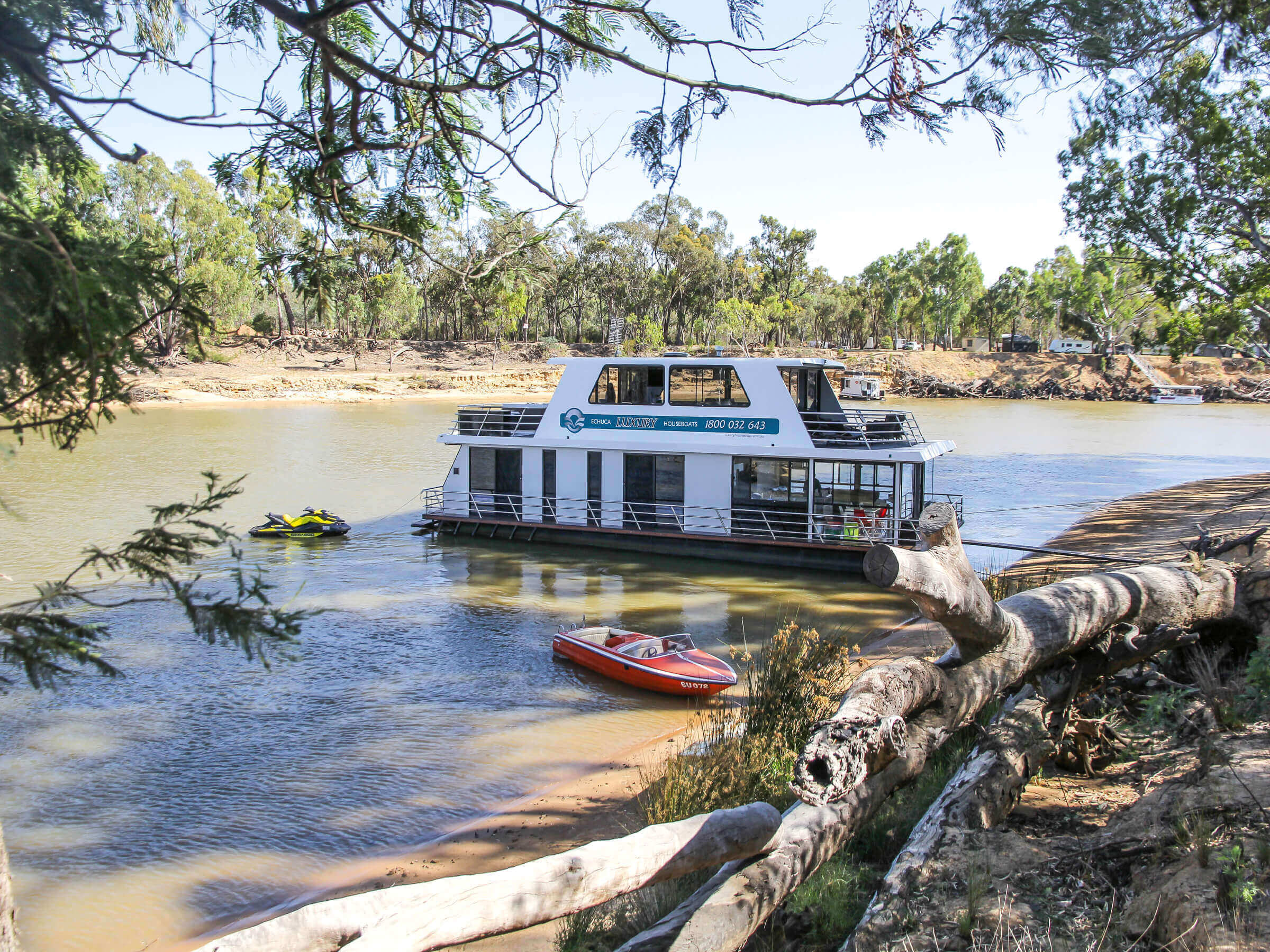 Icon enjoys the shade on a bend in the Murray.
It’s definitely a case of life in the slow lane exploring Echuca and the Murray River on a luxury houseboat.

“How’s the serenity? So much serenity …” These immortal words uttered in the iconic Aussie movie, The Castle by Michael Caton’s much-loved character, Darryl Kerrigan, came to mind as I peered out over the rear deck of our houseboat Icon on a balmy December morning, while a family of ducks paddled lazily by on the hunt for breakfast.

Then, as if to puncture the tranquility, a chorus of sulphur-crested cockatoos restlessly squawked their raucous greeting to the new day amongst the red gums on the far bank of the river as the emerging sun spread its warmth through the trees.

Meanwhile, the Murray River continued to swirl serenely past our mooring, its muddy brown waters headed for Goolwa, south of Adelaide some 600-or-so kilometres to the west as the cockies fly – or a whopping 1700km as the cod swims.

It was day three of our five-day Echuca Luxury Houseboats-hosted Murray River experience and I was very definitely feeling the serenity. In fact, I had become so serene I was bordering on comatose. But in a good way.

It helped, of course, that our home for the past few days was afloat on Australia’s greatest waterway, so rich in history and wildlife.

Icon is the flagship of a fleet of five fully appointed luxury houseboats run at Echuca, on the Victorian side of the Murray, by husband and wife team, Andrew and Jacinta Mackenzie.

Icon is a lot more house than boat – actually more like a palatial two-storey luxury apartment that just happens to float.

Four spacious bedrooms on the lower deck each have their own views of the river and their own en suites, robes, air-conditioning and LCD TVs.

But guests are unlikely to spend too much time reclining on their beds as the rest of Icon is devoted to entertainment, dining and recreation on an almost industrial scale.

Stepping aboard, the lower front interior is devoted to a large open lounge and fully equipped kitchen and dining area, with an island servery. In the front port corner are the helm and skipper’s controls.

But while the lower deck is more than welcoming, it was upstairs where we spent the vast amount of our time. The upper deck is all about wining, dining, entertaining and relaxing, boasting one large interior space incorporating another fully equipped kitchen and dining area, with access to an open deck at the front and an eight-person spa on the rear deck.

Whether underway or parked under the shade of the river gums, upstairs was definitely the place to while away the time. And in the evening the spa beckoned, its swirling waters easing tensions and helping to infuse even more serenity.

All interior surfaces and furniture were high quality and there was enough refrigeration upstairs and down to keep a large crew in food and drink for at least a week without restocking.

Given we were on a river, navigation was not an issue and employing the twin Mercury four-stroke engines gave us a modest top speed of around five knots, which was at least enough to give us adequate control and allowed us to head upriver against the current at a relaxed pace.

Andrew gave us a very thorough briefing and accompanied us on a test run before leaving us to our own devices.

It took a little while to become acquainted with the handling characteristics of a floating apartment block, but after a kilometre or two I was driving Icon like an old river captain. The large helm wheel required a deft touch as, unsurprisingly, Icon was not the quickest vessel I’ve steered in terms of helm response. It required an element of anticipation so that I needed to prepare for a turn in advance, spinning the wheel one way and then slowly inching it back to the centre to avoid ‘over-steer’.

Each time we ventured up or down the river we’d look for a suitable beach or spot on the bank and then simply turn Icon 90 degrees and nudge the throttles forward. The momentum was generally enough to have us firmly parked on the bank and then it was simply a matter of securing the lines to a handy tree or stump.

Generally, we explored the river during the day and moored late in the afternoon so we could enjoy the spectacle of a calming summer sunset as the river and its surrounds settled in for the night.

Sipping cold drinks on the forward upper deck as the river flowed gently by was the perfect start to each evening. We generally had most of the river to ourselves as early December was conveniently just before the start of the peak holiday season, when tourists flock to the Victorian/NSW border region.

We also had a new Sea-Doo GTR 215 at our disposal, courtesy of Melbourne Sea-Doo, for when we felt a bit more adventurous – it turned out to be the perfect companion for a houseboat holiday on the Murray. Being on a river definitely adds another dimension to riding a PWC and allowed us to explore some of the more inaccessible and remote areas of the waterway.

Along the way, we encountered a variety of wildlife, from the occasional mob of roos, to flocks of cockatoos, soaring wedge-tailed eagles, families of ducks pecking their way along the river bank and even one startled goanna leisurely making its way across the river. Once it realised it had captured the attention of a human on a bright-yellow Sea-Doo, it upped the pace somewhat and was last spotted surging up the bank and disappearing into the undergrowth.

For those wanting to cram more activities into their houseboating holiday, there are a range of local features and attractions in and around the twin border towns of Echuca and Moama.

The river meanders lazily east and west, much as it has done since the paddle steamers plied their trade in the 1800s, carrying produce from the region to the Murray’s mouth in South Australia.

Echuca is still very much a working port, only the main cargo now is tourists, with restored paddle steamers offering languid cruises and history lessons for their guests.

For those wanting to explore the local area and take a break from the river, there are more than enough distractions and attractions close by, including a good range of restaurants, cafes and pubs.

One recommended to us was Morrisons Winery and Restaurant, just a stone’s throw from Echuca and with easy access from the river on the NSW side. We enjoyed a selection of Morrisons’s wines and fine dining, while in the company of a cheeky pair of kookaburras overlooking a tranquil bush setting.

Echuca hosts a number of annual festivals that can add another element to a houseboat holiday, including the Riverboats Music Festival in February and the Winter Blues Festival in July.

Other things to see and do include fishing, although I have to confess our own efforts during our stay did nothing to impact local fish stocks. I am reliably informed, though, that if you are reasonably competent with a rod and reel there are healthy numbers of Murray cod, yellowbelly, silver perch and redfin to keep anglers occupied. The further west you go the better, apparently, with the best fishing closer to the weir at Torrumbarry, where the river is wide and deep, or upstream, where it narrows through the Moira and Barmah redgum forests.

Bushwalking is another popular activity. Pretty much wherever you decide to stop along the river there is likely to be access to local bushland and nature lovers will be rewarded with plenty of wildlife to fascinate and delight. Trail-riding is another option for those who’d like to see the countryside from the saddle.

Depending on your agenda, I’d suggest you consider taking a boat or PWC with you as they certainly throw a lot more activity options into the picture, especially if you’ve got younger crew members to keep entertained and amused.

For those looking for a relaxing escape in a place packed full of history and in an area with plenty of wide-open spaces and hidden coves to explore and enjoy, an Echuca houseboating holiday is hard to beat. A word of warning though – you’ll need to allow for a couple of days to reacclimatise once you’re back home because that serenity can take quite a while to shake off …

IT’S ALL ABOUT LUXURY …

Echuca Luxury Houseboats is focused at the higher end of the houseboat hire market and prides itself on being the only Echuca/Moama-based company that has a continuous program to build new state-of-the-art houseboats to introduce to its six-boat fleet.

Icon was the company’s first ‘Super Class’ houseboat, but it has just recently launched Infinity, which takes the luxury houseboat concept to a new level, offering a total of six bedrooms and a range of luxury appointments.

Hirers are encouraged to provision locally prior to boarding, with plenty of options for fresh produce, liquor and other requirements. Echuca Luxury Houseboats has plenty of suggestions depending on tastes and needs.

There is also a secure lock-up compound available to store cars.

Hire rates are dependent on the particular boat and the time of year and range from $2250 for three nights on Ultimate 1 and 2 (from June to August) to $6500 for the new Infinity flagship for seven nights from February to March.

A deposit of $1000 will get you started, with a security bond also required depending on the boat hired.