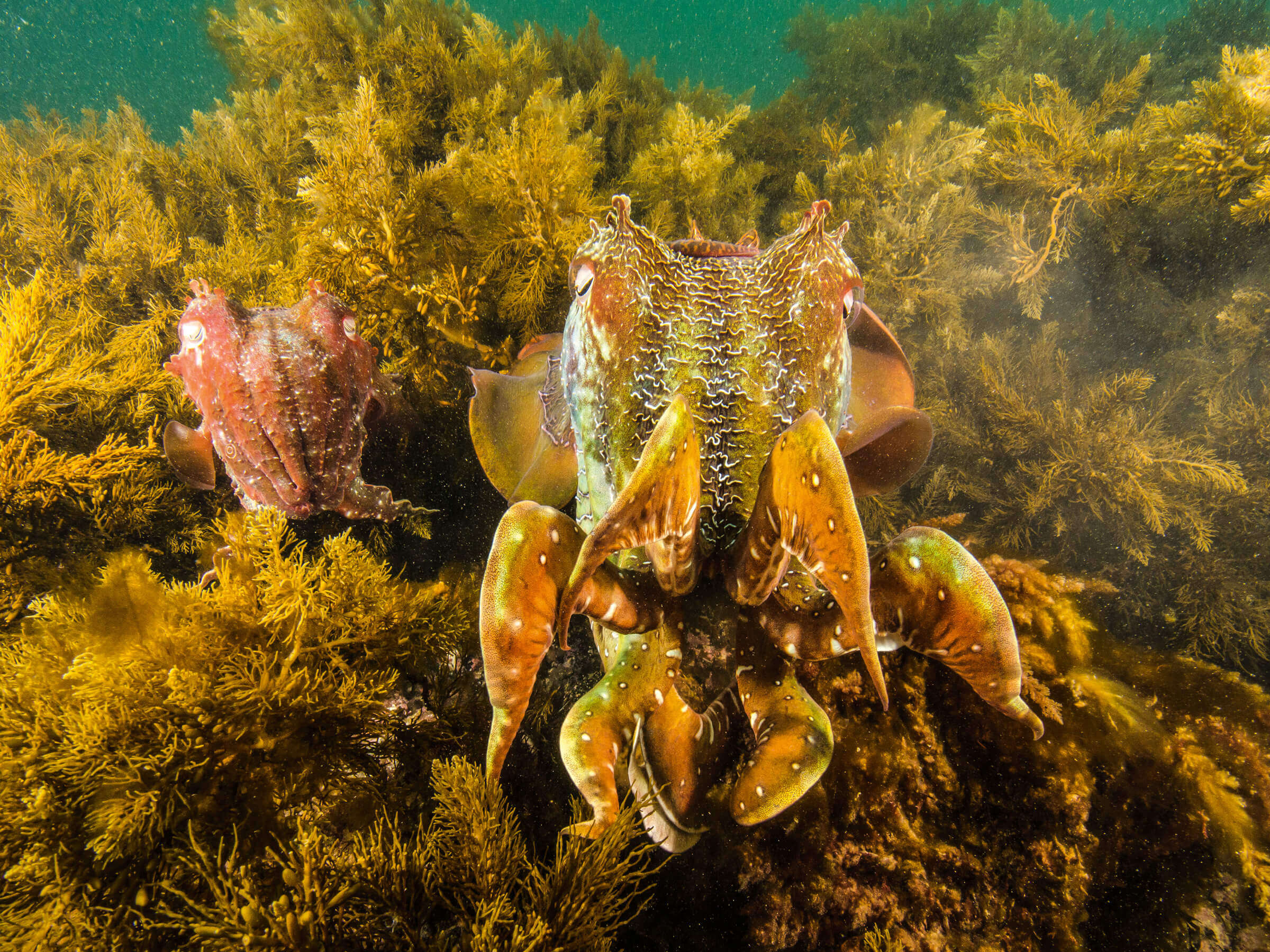 Each winter, large numbers of giant cuttlefish congregate close to shore in SA’s Spencer Gulf, presenting the changing colours of their mating rituals.

Australia has one of the largest and most spectacular coastlines in the world. It defines us as a nation and is one of our greatest assets. Most of the attention is directed at the warm tropics, with the temperate waters hiding away in the shadows.

These cooler waters are some of the country’s last unexplored frontiers, which is why it’s not surprising that there are still so many fascinating secrets yet to be discovered. It’s a part of the charm and lure for adventure seekers and water enthusiasts.

I recently discovered one of these hidden treasures in the waters of Whyalla. Positioned on the western shores of the upper Spencer Gulf in South Australia, it’s a small coastal town where the country meets the sea. A tourism campaigner’s dream, this area showcases some of Australia’s most iconic animals. Kangaroos can be seen hopping along the beaches, flocks of galahs soar in the skies and charismatic dolphins and seals swim along the coastline.

It’s here that one of the most spectacular marine events can be witnessed. With the guidance of the local dive shop and Carlo Possagno (a passionate scuba diver otherwise known as the ‘Mayor of Point Lowly’), we were introduced to the extraordinary giant cuttlefish.

True to their name, these cuttlefish are the largest on the planet, reaching up to half a metre in length and weighing an impressive 5kg. They’re only found in the cooler waters of southern Australia and Whyalla is the only place where massive aggregations have been recorded. It’s a little-known secret that is putting this seaside town on the international map.

These animals are like something from a science-fiction novel – they’re blue-blooded, jet-powered illusionists that can change the colour and texture of their skin in an instant. They rely on this chameleon-like ability to sneak up on prey, which aren’t safe even from a distance. Retractable tentacles shoot out from their mouths, sealing the fate of any fish, crab or other crustacean that is unlucky enough to come onto the cuttle’s radar.

When the water temperate drops, from April to September, tens of thousands of these pulsating light machines come into the shallows to breed. And when it comes to making baby cuttles, their natural history becomes even more fascinating.

At first glance, it’s like a typical high-school love story. Big, muscular boys get the cute girls, while the others sit on the sidelines. The male cuttlefish compete for the interest of the smaller females, flaring their arms, flashing their bellies and putting on a colourful light display. It’s thought this also serves to intimidate their rivals.

Although this may seem harmless and polite, many battles ensue, resulting in a tangle of arms, battle scars and the loser swimming off, occasionally inking in protest.

Look a little closer at what’s going on, though, and things get even more interesting. Those smaller males sitting on the sideline have a few tricks up their tentacles, too, and are a living example of how brains can win out over brawn. These males use their small size and colour-changing ability to their advantage – by mimicking the colour patterns and postures of a female, the sneaky males can swim past their bigger counterparts undetected and get to mate with their chosen cuttle.

The females are courted by several colour-changing suiters all vying for their attention. On average, one female will have the interest of four males, but as many as 11 males have been observed trying to seduce one female. When one of them wins her heart (actually, she has three hearts, so there’s a lot to go around), they do the ‘cuttle cuddle’, mating head-to-head. Sometimes, the female’s entire head can disappear under the net of her larger partner’s arms.

The male gifts the female with a sperm packet, which she uses to fertilise her eggs. The shallow reefs of Whyalla provide the ideal place for the female to lay her eggs, with the male fiercely protecting her. The leathery eggs hang like white, teardrop-shaped chandeliers amongst the rigid protection of the rocks, taking around four months to hatch. Unfortunately for the young cuttles, when they hatch mum and dad won’t be there – after the colourful courtship, many cuttlefish die, as the lifespan of these giants is only two years.

You can find these colour-changing chameleons along South Australia’s Spencer Gulf coastline from Fitzgerald Bay, around Point Lowly to False Bay. The latter is a cuttlefish closure area to protect the population, with no fishing during the peak breeding season. There are a number of land access points and boating options to see the cuttles in any weather conditions.

What really blew me away was just how close to the shore this natural phenomenon occurs. In knee-deep water, there are giant cuttlefish as far as the eye can see – the deepest we saw them was in just three metres. There are no raging currents to deal with either, and it’s perfect for swimmers of all abilities … admittedly, it’s cold, but that’s nothing a warm wetsuit can’t fix. The local dive shop can fit you and the family out and also offers boat charters. It’s a once-in-a-lifetime experience, so put it on your bucket and spade list – it will be worth the trip.