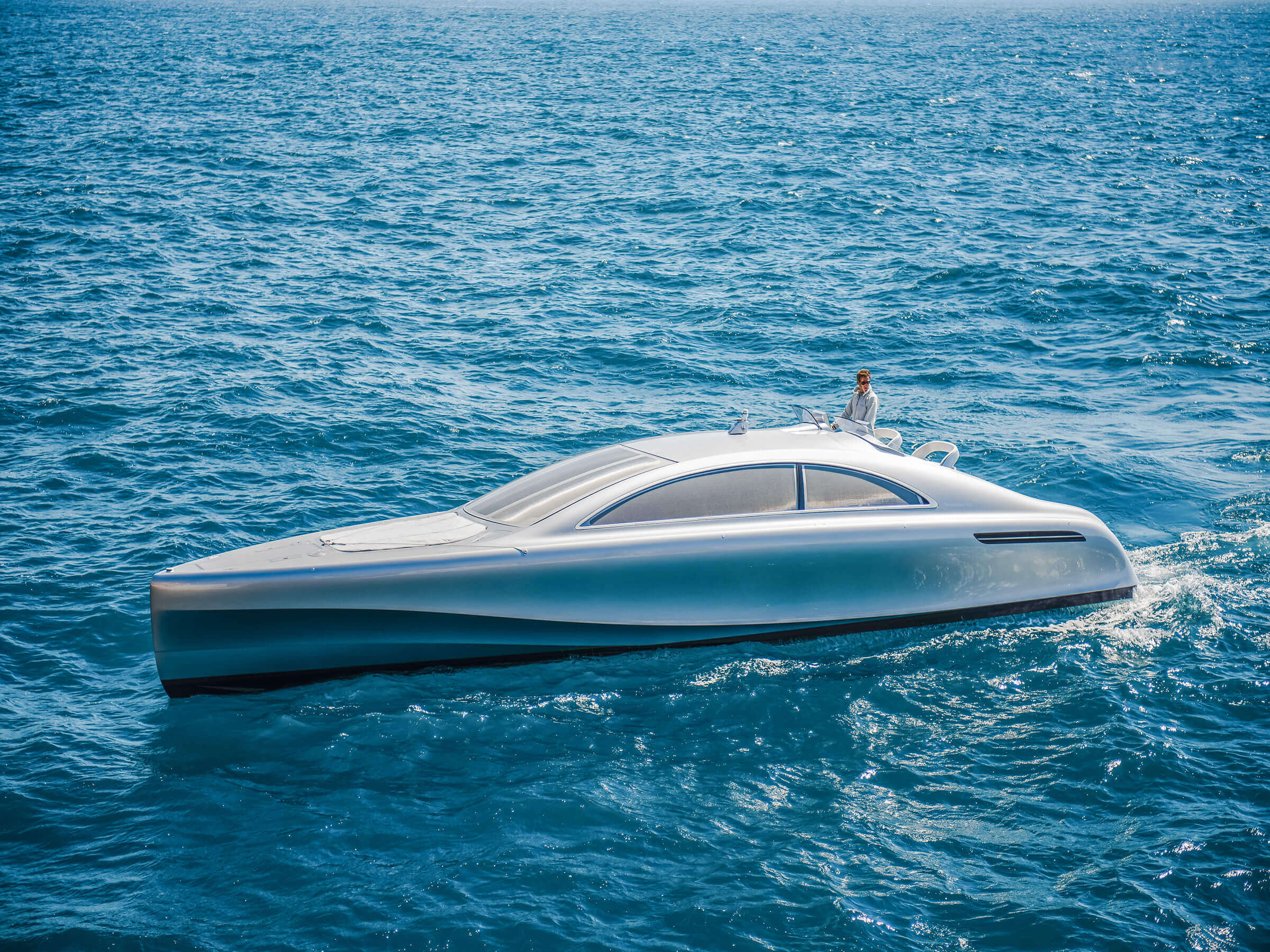 The quest is over for the ultimate trinity of air, land and on-water mobility – Mercedes-Benz has closed the glaring gap left open since the 2011 launch of its exclusively appointed Airbus H145 helicopter, presenting its first open-top luxury four-seater since 1971 with the new S-Class Cabriolet and (cue drumroll) the long-anticipated Arrow460 Granturismo powerboat.

Under its Mercedes-Benz Style label, the creator of the legendary Silver Arrow race cars (and the ensuing fleet of high-end silver vehicles) has teamed with Silver Arrows Marine to create the Arrow460 Granturismo.

The 46ft (14m), 706kW (960hp) ‘Silver Arrow of the Seas’ is said to combine the performance of Mercedes-Benz sports cars with unique innovations from the marine industry. It bears classic automobile proportions, with a long foredeck, a flowing, arched roofline, and a slightly descending rear. With plenty of room for 10 people aboard, the sleek vessel combines open-boat characteristics with cabin-cruiser-style comfort, making it equally suited to day trips and overnight stays.

Innovative features abound, including a retractable ‘terrace by the sea’ swimplatform, and an inbuilt sundeck with double-console cockpit. Electronically dimming ‘smart’ glass is used for the windows and roof of the saloon and, just as in the S-Class Cabriolet, the side windows and large upper windscreen open at the press of a button, adding an al fresco element to the interior.

The tables and beds are extendable, converting the saloon into private quarters when required. A luxurious bathroom unit, separate dressing room, wine cellar and icemaker, high-end audio and visual systems, and the customary assortment of high-tech amenities we’ve come to expect from a Mercedes-Benz production are also included.

While the figures for speed and efficiency are yet to be confirmed, it’s expected the twin 353kW (480hp) Yanmar six-cylinder diesel engines will send hearts racing at a cruising speed of around 26 knots (48km/h) and a top speed of 40 knots (74km/h).

The fully equipped Arrow460 Granturismo Edition 1 comes with a comely price tag of 2.5m Euro … or around the $3.8m mark, plus whatever it would take to bring it Down Under.

Meanwhile, since the Arrow460 Granturismo’s maiden voyage on the Côte d’Azur in April, Mercedes AMG Petronas Formula 1 drivers Nico Rosberg and Lewis Hamilton met on May 29 during the run-up to the Monaco Grand Prix for a sensational event off the racetrack.

Under the motto ‘Speed and Style’, they demonstrated how modern luxury and racing performance blend perfectly under the Mercedes-Benz star – both on water and on land.

Aboard the Arrow460 Granturismo, and superbly offset by his arrival in the S-Class Cabriolet, Rosberg demonstrated what a relaxed lifestyle cruising off the coast of Monaco looks like.

Not to be outdone by his teammate, Hamilton put his driving ability to the test on the water with the Cigarette Racing 50 Marauder AMG Monaco Concept, inspired by the current Mercedes AMG Petronas Formula 1 car.

The high-performance Cigarette is equipped with the most powerful series-production twin engines in the Cigarette portfolio – two Mercury Racing V8 racing engines, each with 1140kW (1550hp), which reportedly propel the 50ft (15m) powerboat to an estimated top speed of more than 228km/h (142mph, or roughly 123 heart-stopping knots).

In case you’re wondering, this unique boat is priced at around US$1.6m when purchased in Monaco, more if it’s to be delivered to your home.

More information about Silver Arrows Marine and Cigarette Racing Team is available at: SilverArrowsMarine.com and CigaretteRacing.com.