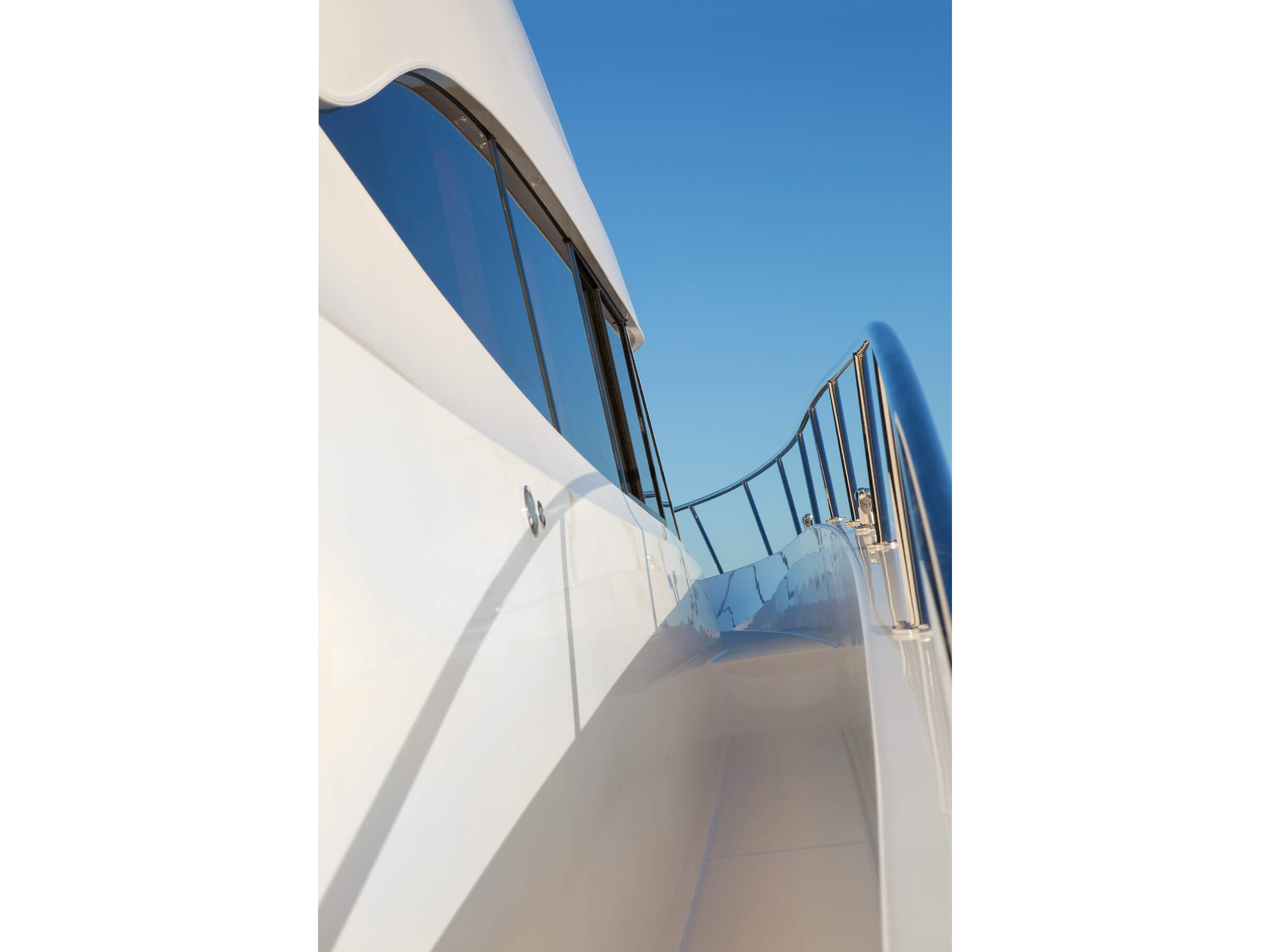 Whether cruising the Whitsundays or at anchor, Maritimo’s impressive new M61 offers plenty of space to entertain and relax.

Meandering up the Gold Coast’s Broadwater on Maritimo’s new M61 Cruising Motoryacht, my mind began to wander. With boats coming and going in all directions on this busy waterway, and the Gold Coast cityscape in the background, I couldn’t help drifting off. If I squinted just enough, the surrounding clutter almost disappeared and I could imagine we were cruising through Solway Passage in the Whitsundays, turning to port to see the magnificent expanse of Whitsunday Island’s Whitehaven Beach unfurl before us.

It seemed to me that the M61’s designers had the Whitsundays in mind when they penned the lines of this elegantly styled cruiser.

Cruelly, Maritimo marketing chief Greg Haines interrupted my cruising fantasy and brought me back to reality.

Earlier, at the company’s Hope Harbour docks, we had toured the M61, which Maritimo has dubbed its ‘mini 65’. At the 61’s release a couple of months earlier, Haines made the point that a primary focus was to offer a slightly smaller boat (65ft overall as opposed to the 70ft overall for the 65) to cater for couples who felt the 65 was just a little too big, plus the fact that berthing options become a bit scarce once you approach 70ft.

As we wandered through the interior, it was obvious that Maritimo has still managed to retain the generous galley, saloon and cabin space of its 65 flagship without any real compromise.

At the touch of a button, the central transom unit raises to reveal a lazarette big enough to stow a couple of kayaks or paddleboards, or even a small PWC. The lazarette also houses the water and blackwater tankage. While the review boat employed the Euro transom option, owners can also opt for either an island or fishing transom layout.

From the swimplatform, owners have access to a fridge/freezer unit on the port side of the transom, while on the starboard is a barbecue and sink. In the middle is a door for lazarette access.

Stairways either side of the transom lead up into a generously proportioned cockpit, with rope and fender lockers and, on this boat, an aft helm with a ZF joystick control and throttles. Guests can relax on a forward-facing lounge serviced by a removable teak table.

Maritimo’s signature deep walkways to the foredeck can be accessed from either side of the cockpit. Up front is plenty of space to install a RIB.

The bifold cockpit doors turn the main deck into one large space, where all aspects of onboard living can be enjoyed without interruption. The rear galley boasts a generously proportioned island bench, incorporating a dishwasher and plenty of storage, while galley facilities include a multi-rack pantry, full-size fridge, Miele ovens and a three-element induction stove.

Opposite is the internal flybridge staircase, under which resides an entertainment unit incorporating a programmable fridge/freezer unit, icemaker and 40in pop-up TV.

The ample saloon seating is enhanced by a fold-out polished teak table for dining, that also acts as a storage unit for crockery. There is also plenty of stowage under the lounges.

Full-width windows ensure there is always plenty of natural light and excellent visibility.

A central companionway leads into the heart and soul of the M61, where guests will be pampered by an impressive and opulent three-cabin/three bathroom layout, which you’d expect to find on a larger boat. Directly to port is the double-berth VIP cabin, which has its own en suite head and shower.

Forward is the guest cabin, which also boasts plenty of hanging locker space, twin overhead hatches and, again, its own en suite, which also doubles as a day head.

Turning aft and stepping down past a washer/dryer cabinet, you enter the full-beam master, boasting a fore/aft configured king-size ensemble bed, a small desk/bench to port and plenty of locker and drawer space everywhere you look. A total of six oblong portholes, four of which open, combine with soft lighting to ensure the cabin is well lit. The master also has its own large en suite bathroom.

Customers can also opt for a four-cabin/two bathroom layout.

Lustrously polished teak cabinetry and quality soft furnishings everywhere reinforce the impression of understated luxury and elegance that is a signature of the Maritimo fleet.

As we manoeuvred out of the pen using the combination of bow thrusters and the ZF joystick, with Maritimo’s ace skipper, Ross ‘Rosco’ Willaton at the helm, Greg Haines conducted a tour of the expansive flybridge.

Folding doors lead to a spacious open deck area ideal for lounging or admiring the view.

The flybridge interior is the equal of many saloons and is really a self-contained entertaining area, with a small rear-facing lounge foreward, plus a large L-shaped lounge behind the helm on the starboard side serviced by a fold-out teak table. Opposite is an entertainment unit and in the rear corner is a compact fridge/freezer unit and sink.

The helm area is all you could expect for a large ocean-roaming cruiser, with our review boat fitted with multiple Simrad large-screen radar and chartplotter units in a dash designed with both utility and aesthetics in mind. Uniquely, this boat is fitted with a combination of manoeuvring options, including toggles for hydraulic and electric bow thrusters, a ZF joystick, plus the standard Scania throttle controls. Haines explained that the owner had stipulated he wanted the security of multiple controls in case one of the systems went down during close-quarters manoeuvring.

He also opted for a powerful combination of twin 1150hp Scania D16 common rail diesels, hooked up to a ZF drivetrain and shaft drives to over-large 34 by 50in pitch propellers, which deliver a responsive package that is also impressively quiet and relatively vibration free.

In combination with standard twin 2750lt fuel tanks in the engine room and an additional 1700lt tank under the forward berth, total range is enough to deliver the boat to its Auckland-based owner – more than 2200km – without additional tankage.

We ventured beyond the Seaway into a three-metre swell off the Gold Coast and the hull’s performance in both head and following seas was outstanding, cushioning its occupants against the rolling waves. Maintaining a steady 17 knots, (31km/h) with a fuel burn of around 120lt/hr, the Scanias hardly noticed the conditions, while the steering was light and precise.

Back in the flatter waters of the Broadwater, our pace quickened, although I was still surprised that we were doing 24 knots (45km/h) given the lack of vibration and noise.

Maritimo’s M61 appears to have hit a hot spot in the large-cruiser market. Already, six have been sold in barely three months, buyers liking what they see in terms of its spacious dual-level luxury, thoughtful layout and fuel-efficient, long-distance passage-making ability.

Final note to self: to ensure authenticity, the next Maritimo cruiser review must be conducted on the waters of the Whitsundays. Readers deserve nothing less …