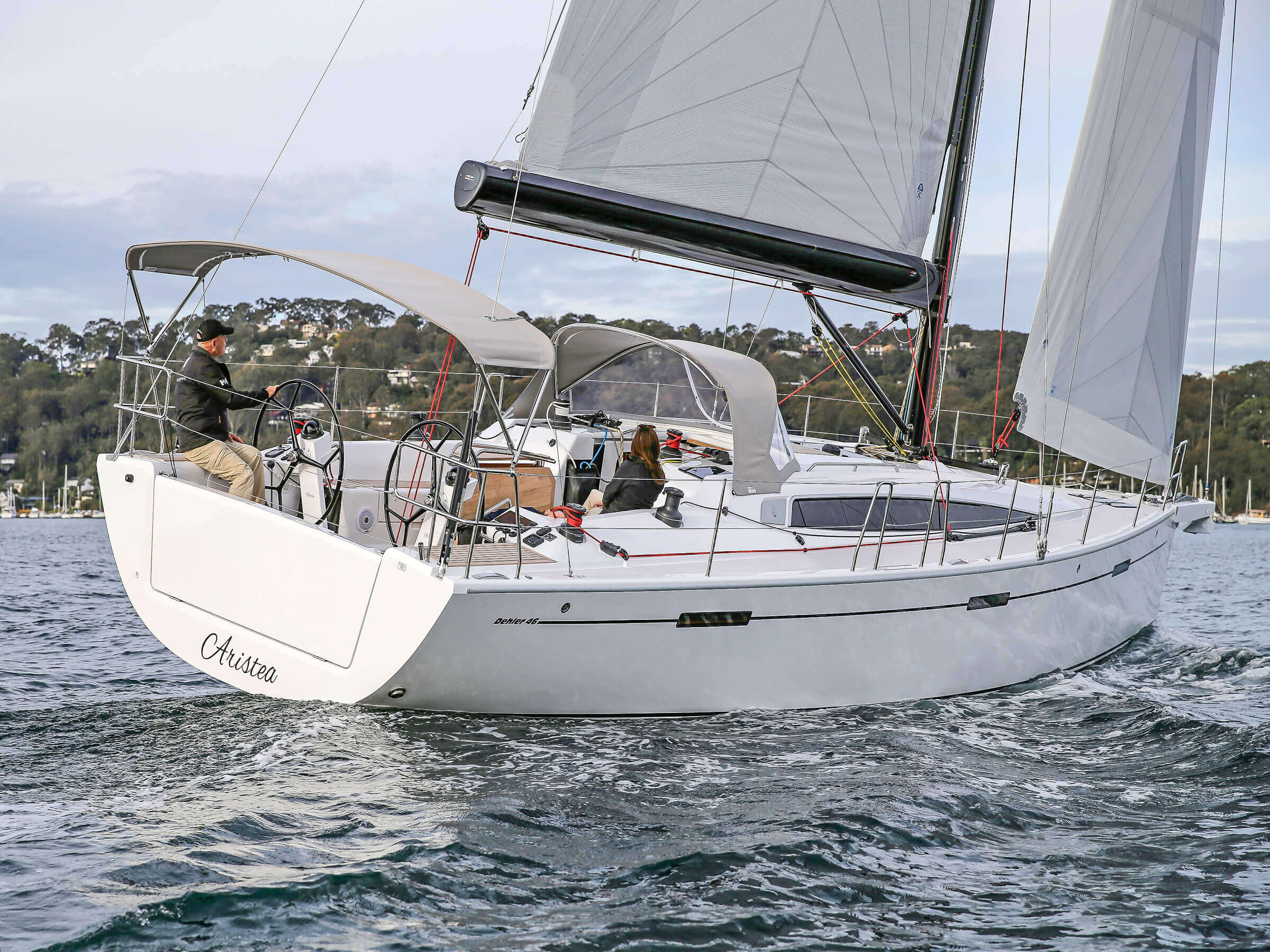 Dehler has added to its fleet of cutting-edge performance yachts with the 46, a sleek sailboat that’s bound to appeal.

It’s hard to believe that the man after whom the sleek and eye-catching Dehler 46 is named originally wanted to build caravans, not yachts. Fortunately for the sailing world, the famous yacht designer Ricus van de Stadt – who was to be Dehler’s chief designer for many years – persuaded Willi Dehler to give caravans a miss.

Willi Dehler soon became one of the first production boatbuilders to recognise that speed would be a major selling point for cruising yachts and so developed a string of highly successful 30ft racing yachts during the late 1970s, which were subsequently adapted with equal success as cruising yachts.

Although the Dehler brand now operates under the Hanse banner, the parent company has nurtured the marque’s distinctive pedigree and design philosophy, made very evident in both the Dehler 38 and now the Dehler 46. Remarkably, many of the features found on the Dehler 46 – wheel steering, topside ports, fractional rig and L-shaped galley, to name a few – first appeared as ground-breaking features on Dehler yachts in the 1970s.

That being said, searching for comparisons in performance and comfort between the yachts of 40 or 50 years ago and today’s cruiser-racers would bear little fruit, not least belowdecks.

Descriptions such as bright, light and airy seem to be universal amongst boat reviews for the interiors of the modern crop of fast cruising yachts, with most brands now offering large deckhead skylights, generous cabin-top windows and hull ports in the topsides. Such features abound on the Judel/Vrolijk-designed Dehler 46, with so much light entering the main saloon from various angles that even the selection of the standard mahogany cabinetry in the test boat (less flattering to the design than the cherry or teak options to this reviewer’s mind) did little to reduce the sense of a very bright saloon.

Many of the interior fittings and features found in the Dehler 46’s smaller sibling, the 38, can also be found here, but with the advantages of the extra room that comes with an additional 8ft (2.5m) of waterline length.

While the curved racing form of the boat’s hull (particularly aft of maximum beam) inevitably reduces the interior volume, the Dehler team has made smart decisions that ensure a sense of generous space in the cabin and ample storage above and below. You can even store your bike aboard if you choose the single-berth, port-side aft cabin option.

Smart touches in the main cabin include a sliding navigation desk offering fore- or aft-facing seating, an instrument panel set in the stylish curved cabinets running the length of the main cabin, and an additional fridge drawer on the inboard end of the galley that can be reached from the saloon table.

The galley is modest but functional, with a three-burner gas stove, double sink, top- and front-loading fridge, a microwave and the Hanse Group’s ubiquitous Nespresso coffee machine in its own locker.

Hanse’s Uni Door (a single door that can either separate the head from the vanity or the en suite from the adjoining cabin) is to be found in the heads and shower compartment off the main cabin and in the forward master cabin.

Perhaps the most surprising feature of the interior is the part you are least likely to see – lift the floor panels and the quality of finish in the bilge and over the grid that forms the main structure would do justice to a saloon interior. More importantly, this hidden part of the boat is reassuringly strong. After a string of disastrous keel losses on yachts from other major production houses around the world, it is heartening to see the lengths that Dehler has gone to combine strength and lightness in the keel area, with a carbon grid bonded into the vacuum-infused hull.

So does this interior finery, comfort and gadgetry come at a price to the Dehler 46’s sailing performance? We headed down Pittwater on a beautiful winter afternoon to find out.

Alas, what had promised to be a rising northerly afternoon breeze faded in a gentle diminuendo, but at least we had a chance to try out the engine.

Turning the throttle to full chat, the 53kW(72hp) Volvo engine soon had the D46’s 10,700kg of displacement humming along remarkably quietly at nine knots (16.7km/h) and a very respectable 2800rpm. As I stood at the wheel holding the boat head-to-wind, Windcraft’s Dehler agent, Ric Hawkins, talked me through the ridiculously simple mainsail hoisting procedures (if the word ‘hoisting’ implies some physical exertion, there was none evident here), while his colleague, Kirsten, unfurled and trimmed the self-tacking headsail (a 106 per cent overlapping headsail can also be rigged).

The close working relationship between Southern Spars and North Sails was only too evident in the combination of the eye-catching black carbon boom and the fully battened sail. The quality of design and workmanship on this combination – unique to Australasian buyers – is remarkable and reflects the superyacht experience that they are now able to downscale for production yachts.

The carbon boom and mast make up the competition package, which offers 14sq m (150sq ft) more sail area and 315kg less weight aloft than the standard rig package. In combination with the competition T-shaped keel at 2.5m (8.2ft) draught, this package offers a significant performance gain for those looking to race competitively.

With little more than five knots of breeze, it was hard to draw any useful conclusions on the D46’s sailing performance … other than to remark on the delightfully light touch on the wheel in so little wind, with the boat tracking beautifully upwind and rolling easily through the tacks as if the breeze were five knots stronger.

Ric Hawkins has been sailing competitively with a number of new Dehler 46 owners – including, most recently, at Audi Hamilton Island Race Week – and says of its performance: “The Dehler 46 is an impressive yacht to sail, offering a combination of excellent height upwind with superb downwind performance. The competition model, featuring carbon spars with a performance keel and rudder, takes the boat to the next level.”

With the first reports on the new Dehler 34 (recently released in Europe) sounding every bit as promising as those of its larger kin, it’s hard to believe that anyone would have been talking about the Dehler name with such enthusiasm today, had Willi Dehler opted for caravans all those years ago.