Ship on a mission 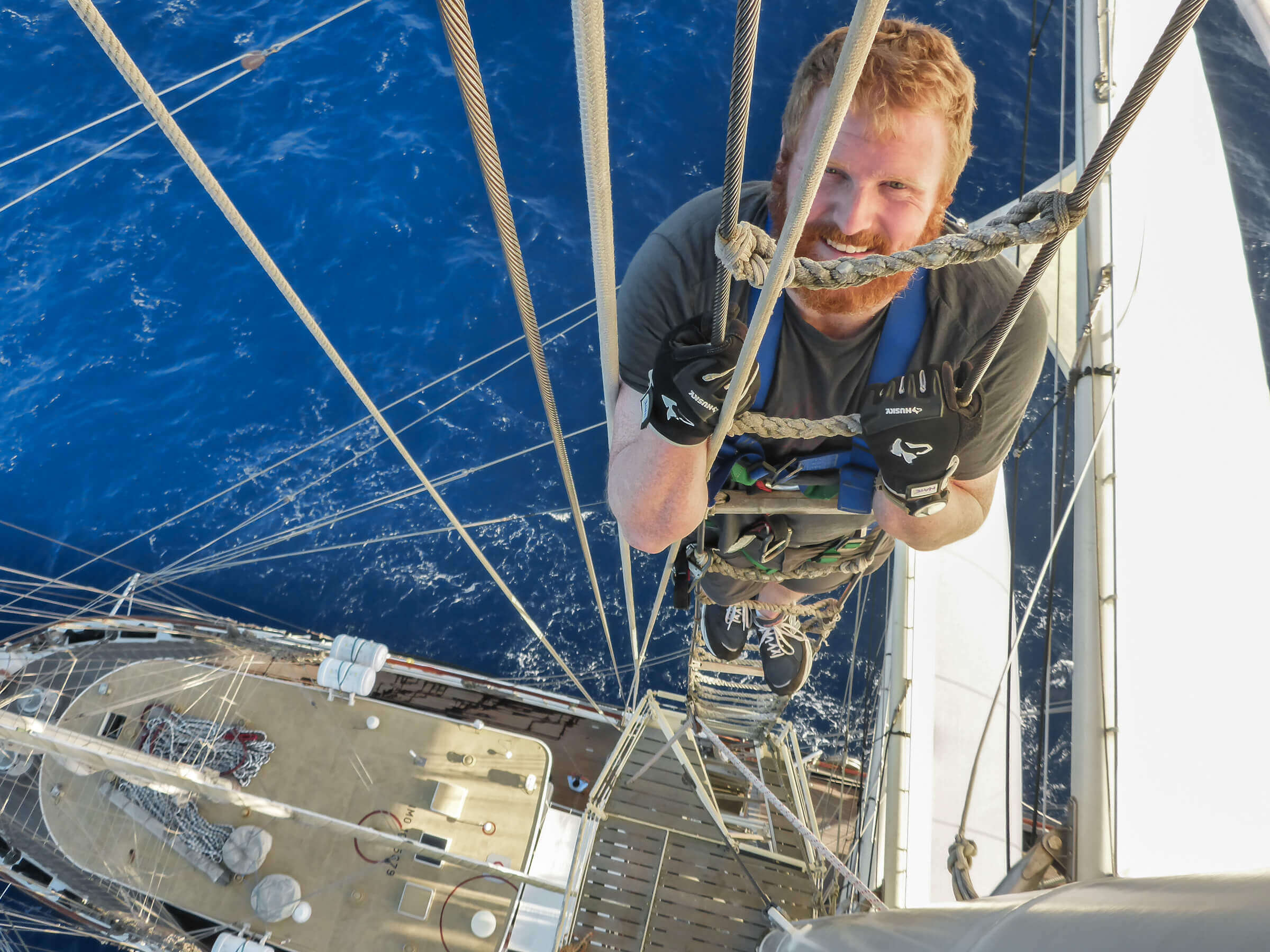 Nate Elliott up the ship's mast
Jubilee Sailing Trust’s tall ships Lord Nelson and Tenacious have taken thousands of people from all walks of life on the adventure of a lifetime.

Tall ship adventures are the stuff of many a childhood dream – who wouldn’t want to clamber up the rigging, commandeer the helm, or pull lines to the call of ‘two six heave’ while enjoying the marvellous feeling of liberty as you sail an endless blue ocean …

Such experiences are closer than you might think, with UK-based Jubilee Sailing Trust’s square-rigged, three-masted barques Lord Nelson (launched 1986) and wooden-hulled Tenacious (2000) offering sailing adventures to anyone over the age of 16 – regardless of physical ability or sailing prowess.

And with Tenacious cruising in Aussie waters, it’s easier than ever to book a berth for a voyage, or go aboard for a day sail. You’ll find the upcoming dates on JST’s website at: jst.org.uk/ Australia.

A FLEET IS BORN

UK-based Jubilee Sailing Trust (JST) was founded in England in 1978 by Christopher Rudd, a keen sailor who taught disabled and special-needs children to sail dinghies, and Dr Tony Hicklin, a medical consultant in rheumatology and rehabilitation and father of one of Rudd’s sailing pupils.

In 1977, they received a grant from the Queen’s Silver Jubilee Appeal. They had suggested adapting a ship, or building a new one, that would enable physically handicapped people to work alongside able-bodied companions as the ship’s crew. They were convinced that working side-by-side to man a ship would benefit both parties and help break down the barriers and prejudices toward those with a disability. Rudd also thought there was no reason why disabled people couldn’t take an active part in offshore sailing – all they needed was a boat fitted out with equipment that would enable them to do so.

Named after Vice Admiral Horatio Lord Nelson – one of Britain’s most heroic figures and perhaps the world’s most famous disabled sailor – JST’s first ship, Lord Nelson, was launched in October 1986 after a two-year build. The concept proved so popular that a second ship was soon planned to accommodate the many people wanting to sail with JST.

Built by a team of some 1500 volunteers, including many living with a disability, Tenacious is 54m (65m including bowsprit) long, making it the largest wooden tall ship built in the UK in the last 100 years, and the biggest operative wooden tall ship in the world.

Both ships are kitted out with special equipment that enables everyone to partake in the joys of sailing – even helming. For blind crew, the ‘speaking’ helm continually reports the heading. Also at the helm are an adjustable captain’s seat with seatbelt, a steering-wheel knob for those of limited mobility, and an adjustable compass that can be rotated and tilted.

There are lifts at seven points to access all areas, including the bowsprit. The doorways have ramps to make them level, there are special fixing points to secure wheelchairs throughout, and wooden guiding tracks for visually impaired crew.

While able-bodied people are accommodated in bunks along two forecastle dormitories (for ladies and gents), specially equipped cabins cater to those needing assistance. They have hoists with a sling and other devices to help transfer them from a wheelchair to the bunk, and the heads have all the supportive features that might be needed. Hearing-impaired crew can have a vibrating pad placed under their sheets that will alert them to an alarm.

TALES FROM THE DECK

Soon after its arrival in Sydney in August, I hopped aboard Tenacious for the 10-day passage to Melbourne (read about the adventure in Tall ship tales, in our October/November 2016 edition). Like Lord Nelson, Tenacious is a working ship and everyone aboard has a job to do, with some tasks shouldered by voyage crew (such as me) and others by the eight-strong permanent team. Because the ship needs round-the-clock attention, you’re assigned to one of four watch groups. The tasks are shouldered by many in four-hour shifts, though, leaving plenty of time to socialise and enjoy the cruise.

A few years ago, while holidaying in Bermuda with her family, Gemma Wyatt met someone who suggested she try sailing a tall ship.

“She thought it would give me confidence as I was very shy and quiet at the time,” says Gemma, who decided to give it a go. Her first trip aboard Tenacious was in February 2011, sailing from Antigua via St Kitts to Bermuda.

“I have now sailed with Tenacious 12 times and her sister ship Lord Nelson once. I have fallen in love with sailing and really enjoy being on the water. Being part of a team and being onboard is incredible – you have to do a bit of everything, such as helping in the galley, setting the sails and being on watch.

“Climbing the mast is one of the highlights of all my trips – the view from the top is incredible. I have also seen beautiful sunsets and lots of wildlife. The food onboard is fantastic and I never go hungry.”

Gemma was born early, at 29 weeks and weighing just over three pounds, and spent the first two months of her life in intensive care after suffering a brain haemorrhage, which left her with overall learning difficulties.

“I have met many friends on my trips and keep in touch via social media. I hope anyone out there – whether they have learning difficulties like me, or any disabilities, or have just had a hard time – will read my story and be encouraged to do things they didn’t think they could. It has changed and improved my life beyond belief.

“My trips have shown me that, although I found some things hard to do, sailing with Jubilee Sailing Trust has enabled me to do things I never thought possible.

Twelve years as an industry analyst had left Nate Elliott exhausted and needing a career break. A vice president and principal analyst for a technology research firm in the USA, Nate wanted a big experience to challenge and energize him.

“When I saw Tenacious would be sailing across the globe I took my chance,” says Nate. “I let go of my apartment, quit my job, and flew to England. I signed on to Tenacious in November 2015 for the Atlantic crossing. 55 days later, we made land in Antigua.

“I learned to sail as a kid, on my family’s little 6m yacht on the Great Lakes (USA). In my 20s, I picked up a few American Sailing Association certifications. But I hadn’t sailed much in the past decade and I’d never spent more than a couple of hours on tall ships. Everything works differently on a square rig – I was essentially learning from scratch.

“Sailing with JST has made me happier, and inspired me, and given me perspective. It’s taught me better teamwork; when you’re in the middle of the ocean, 10 days from land, you’re totally reliant on the people around you.

“It has shown me how much disabled people can achieve when given the opportunity, and taught me how to help offer them those opportunities.

“Anyone can benefit from sailing with Tenacious – young or old, disabled or able-bodied, landlubber or salty dog. New sailors sometimes fear signing on for a long trip, but the longer the passage the more fun you’ll have. You learn more, you get more comfortable, and you fall into the rhythm of the ship’s routine.

“Mixed-abilities sailing is a fantastic idea. I love helping new sailors learn skills and overcome challenges. People accomplish things they never thought they could aboard Tenacious, and their confidence soars. The best day of any voyage is when we do assisted climbs and people with mobility impairments get to head up the masts. Their faces light up and it’s impossible not to smile with them.”

Otis Horne has sailed dinghies with Sailability Hawkes Bay, on New Zealand’s North Island, since he was 12. Having by chance heard about JST when Lord Nelson cruised into Kiwi waters in 2013, Otis was quick to secure a berth for a voyage from Wellington to Nelson. He also joined Tenacious for the Sydney to Melbourne trip, accompanied by his dad.

“Sailing with JST has improved my sailing skills and knowledge about tall ships. The voyages have changed me, and I’ve met awesome new people through something I love – sailing,” says Otis.

“Anyone who wants to give something new a go would benefit from a voyage aboard Tenacious – in particular anyone with a disability who wants to feel that little bit more freedom.

Otis has spina bifida and has used a wheelchair since the age of three. He’s a fitness instructor and works as a sports coach for primary-school children. On our trip, he deftly manoeuvred above and below deck, which he says is relatively uncomplicated aboard Tenacious.

“The facilities are great, but let’s just say it can get really awkward in the head when rolling about side to side at 1am in the morning when you’re waking up for watch. My chair picks up speed super-fast, which means my reactions have to be equal to it – it’s easier when things to grab are close, or places on deck are tighter so I can lock my chair into place. Tenacious has plenty of that in place.”

The Carr lads are a father and son duo from England, who thought sailing to Melbourne with Tenacious would be a great way to start their family holiday in Australia. Peter has used a wheelchair since a motorcycle accident several years ago left him with spinal cord injury.

“The voyage was Dad’s idea,” says Cameron. “He knew that I had enjoyed sailing with my girlfriend’s parents, so thought I might be interested. He had never sailed with JST either.”

“We’ve always been a family of pushing boundaries and this was another one to push,” says Peter. “It was also a great excuse to visit Australia. It was Cameron’s last big holiday before he started a fulltime role as a lawyer, and it was great to pass some father/son time together.

“We loved the inclusive nature of the whole experience.”

“We have a very positive outlook on things and I am the first one to joke around with dad,” says Cameron. “It was so nice to have others who immediately saw past the disability and could joke around with him just as much.

“It was great that you could get as hands-on as you wanted too. I did a lot in my free time aboard, as I was on the Leadership at Sea training programme. And it was actually such a relief to get away from technology and converse with people without everyone checking their phones … everyone really engaged in conversation.

“The blurred age gaps – that’s what really struck me. We hung out one day with a group ranging from 17 to 55-ish. There was no judgment of your age – just fun. I cannot remember the last time I laughed as much as I did on that trip!

“Anyone looking for a challenge or something different should consider Tenacious. There is a real sense of pride, support and camaraderie in this endeavour and anyone who seeks that through working outside of their comfort zone should do it.”