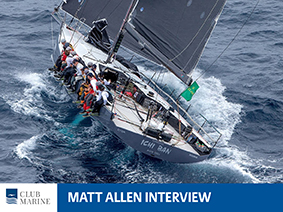 With Matt Allen’s Ichi Ban the current Clubhouse leader in the bid for the Tattersalls Cup we return to a conversation that we had with Matt Allen in the lead up to the race when he spoke about his new boat and his thoughts on the great race ahead.
Interviewer: Matt Allen, the new Ichi Ban TP52, through the various versions of Ichi Ban's and the calculations I guess, are different about how you win. Tell us a bit about what the thinking is here.

Matt Allen: Yeah, well I think we've created a boat that structurally is strong enough for the often pretty precarious conditions that you find on the east coast of Australia, but we've also got a boat that is a really good all round boat, you know, it should go upwind, downwind, in light, medium and heavy conditions really well and you know, you do get a variety of conditions over the 638 miles and ...

So I think this boat actually achieves that, so it gives us a good chance of basically spreading our cards out to make sure that we're always going at a reasonable pace and then you need the weather gods to really give you a bit of extra luck and see how that goes.

Interviewer: And I seem to recall you saying that the 60 was designed to try and avoid that dreadful slot in the Derwent , so you're presumably back in that territory.

Matt Allen: Yeah, it depends, I mean the boats are obviously getting faster and faster and we're configuring them faster and faster, but you just don't know what conditions you're gonna get. I mean, we had a really fast race last year, but we still came in at sort of early morning trying to get the sea breeze. There was no sea breeze, it was just cloudy, so we didn't have any of that.

Interviewer: And you've had the boat built at Longitude Cero in Spain and they're, I think quite eminent in the TP52's. What's the distinctions there that made you choose that?

Matt Allen: Well they had the current mold of the latest super series TP52, so that's a good first ... But it's a latest hull form in the super series and obviously there's a few refinements going on in that class, so I think this gave us the ability to build the boat very quickly.

Had the mold ready to go, we just needed then to make all the structural changes and the waterproofing changes from the super series. So basically, the hull and the deck are pretty similar. The hull's exactly the same, but then there's enormous number of changes, you know, different rudders, different keels, different strengthening, different waterproofing, different rig setups, the whole thing is then quite different. But it's a starting base.

Interviewer: And you were talking earlier about the mast being the same that you've used and the rig and everything. Are you thinking about trying to just largely stick with what you've known from your old TP?

Hopefully we don't get that, but if we do, we can and you know, it's all set up really, to take that ... The boat to Hobart, and we really built that rig assuming that we were gonna put a new hull underneath it at some stage.

Interviewer: And just finally, your crew, tell us a bit about who you're taking with you.

Matt Allen: Yeah, well we've pretty much had the same crew on and off for you know, a long time now, you know Craig Garnett's on the bow, you know, he's been sailing with me on and off since 2002. Will Oxley from the Volvo Ocean Race is navigating in the very luxurious confines of the TP52.
We've got Gordon McGuire, we've got Anthony and Peter Merrington. So we've got an enormous amount of depth in the crew and plenty of Hobart's, I don't know how many Hobart's, but a lot, you know, some hundreds of Hobart's on board and you know, plenty of people who have won the race and we can push the boat really hard. Probably got 9 or 10 people who can drive the boat, we'll just keep pushing and see where we end up.