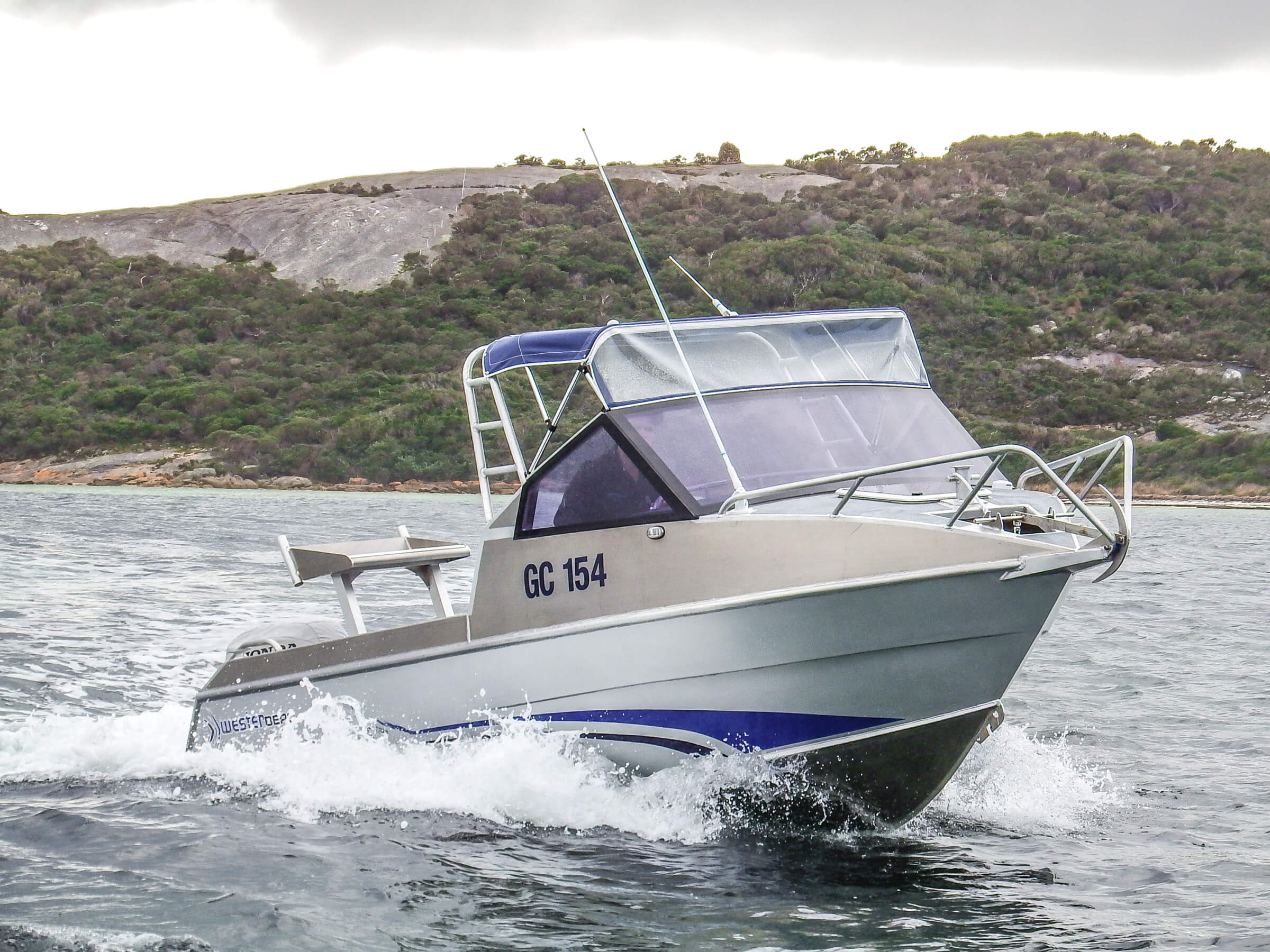 The Bandit is built tough to handle the harsh conditions of WA’s southern coastline.
The Westerberg brand is synonymous with the West Australian boating scene ...

Fleeing war-ravaged Europe and their home in Albania after World War II, professional fishing family the Westerbergs arrived in Albany to establish a new life on the southern shores of Western Australia.

On arrival, the new Australians continued their fishing activities. Out of necessity, they began building their own wooden fishing boats.

In 1977, some family members of the new generation moved out of fishing and opened a vehicle smash-repair shop in town. Some 40 years ago, metal fabricator Cliff Simpson was employed by Westerberg Panel Beaters and decided to branch out with Westerberg brothers Mike and Colin into the aluminium boat market. Initially, they built for locals and surrounding farmers, who would traditionally head to the coast after the December harvest. The business thrived and the Westerberg brand spread state-wide, winning the WA Boat of the Year Award in 1988.

Today’s review boat – a Westerberg 5.3m Bandit Runabout – took out the same award for aluminium vessels under 6m six years ago and is still just as popular.

The slowdown in the boating industry in recent years has seen many custom plate-aluminium boatbuilders close their doors in WA, with Westerberg’s staff cut back to five – a long way from the 18 employed during peak years.

Managing Director Rhys Jones started as an apprentice with the company under the leadership of its founder, Mike Westerberg. Rhys bought the company two years ago and produces boats ranging from dinghy tenders to the 26ft (7.9m) Aurora hardtop cabin boat.

“Work has been steady, thanks to many of our repeat customers, including commercial fishermen. We’re just about to start work on a 23.6ft (7.2m) Southerner from our larger cabin-boat range, an order resulting from the recent Club Marine Mandurah Boat Show,” Rhys said.

“Mike often drops by just to check on how things are going and I think he’s pretty happy that one of his boys is continuing the brand.”

A young, dedicated team now operates the Westerberg factory at its location on the shores of Albany’s Princess Royal Harbour, a few hundred metres from the city’s new Albany Waterfront Marina, opened in 2011.

The 5.3m Bandit Runabout is not a big boat for these waters by any means, but its seaworthiness, and the fact that it will tow on a single-axle trailer, weigh in its favour. Albany has a large retiree population, and the Bandit can be handled by one person if necessary. Also, being on WA’s southern coast, it’s a long haul to northern waters during the winter months, so towing costs can be kept to a minimum.

The bullet-shaped nose is designed to combat large swell or waves that might come over the front end, while the sloping foredeck soon clears any green water and provides extra headroom in the cuddy storage area. It’s a day boat, so there’s no need for bunks – instead, it’s designed to accommodate safety gear on the broad shelves, with ice and tackle boxes on the deck.

All Westerberg boats have fishing as their main application and the hulls have been designed to cope with the open-water conditions off the WA coast. The bottomsides are 5mm thick, with 4mm topsides. Frames are also made from 5mm plate and the sophisticated system of hull and deck stringers is designed for strength. The deck is made of 4mm checkerplate and is self-draining through two large scuppers on the 5mm-thick transom.

Westerberg leaves its vessels unpainted, unless otherwise requested by the customer. Nyalic clear coat cover is used to protect the marine aluminium, which is easier to repair if scratched – unlike expensive two-pack paint. It also means customers can see the quality of the welding … there’s no bog or paint to hide mistakes.

Westerberg’s Bandit Runabout ranges in length from 17 to 17.7ft (5.2 to 5.4m), and it’s all about optimising the deck space as much as possible. The helm is well forward, while wide side pockets double as steps when alighting. There’s an underfloor killtank, transom door and a heavy-duty boarding ladder. The baitboard on the review vessel had been adapted to take a drop-in tow post for wakeboarding or skiing.

Up front, two seat boxes provide storage and feature hinged lids fitted with upholstered seats. On this vessel, the backrests can face forward or backward when fishing or observing a skier out the back. Our test boat was fitted with a Simrad NSS7 evo2 GPS/sounder combo, GME VHF marine radio and a Fusion sound system.

On the bow is the Westerberg-designed stainless steel Admiralty anchor, mounted on the bow roller. They have been proven to work well in sand, mud and rocky bottoms along the south coast and if the flukes do get stuck in rocks, a sheer pin in the shank breaks to release the device.

A 150hp Honda four-stroke outboard was on the transom, but the conditions on the day wouldn’t allow us to get the best performance out of it. While we managed 30 knots (55.6km/h), the combination has produced a top speed of 37 knots (68.5km/h) on a good day.

Price (as tested): $74,990 (including aluminium trailer and offshore safety gear)