Wakes Up In Noosa 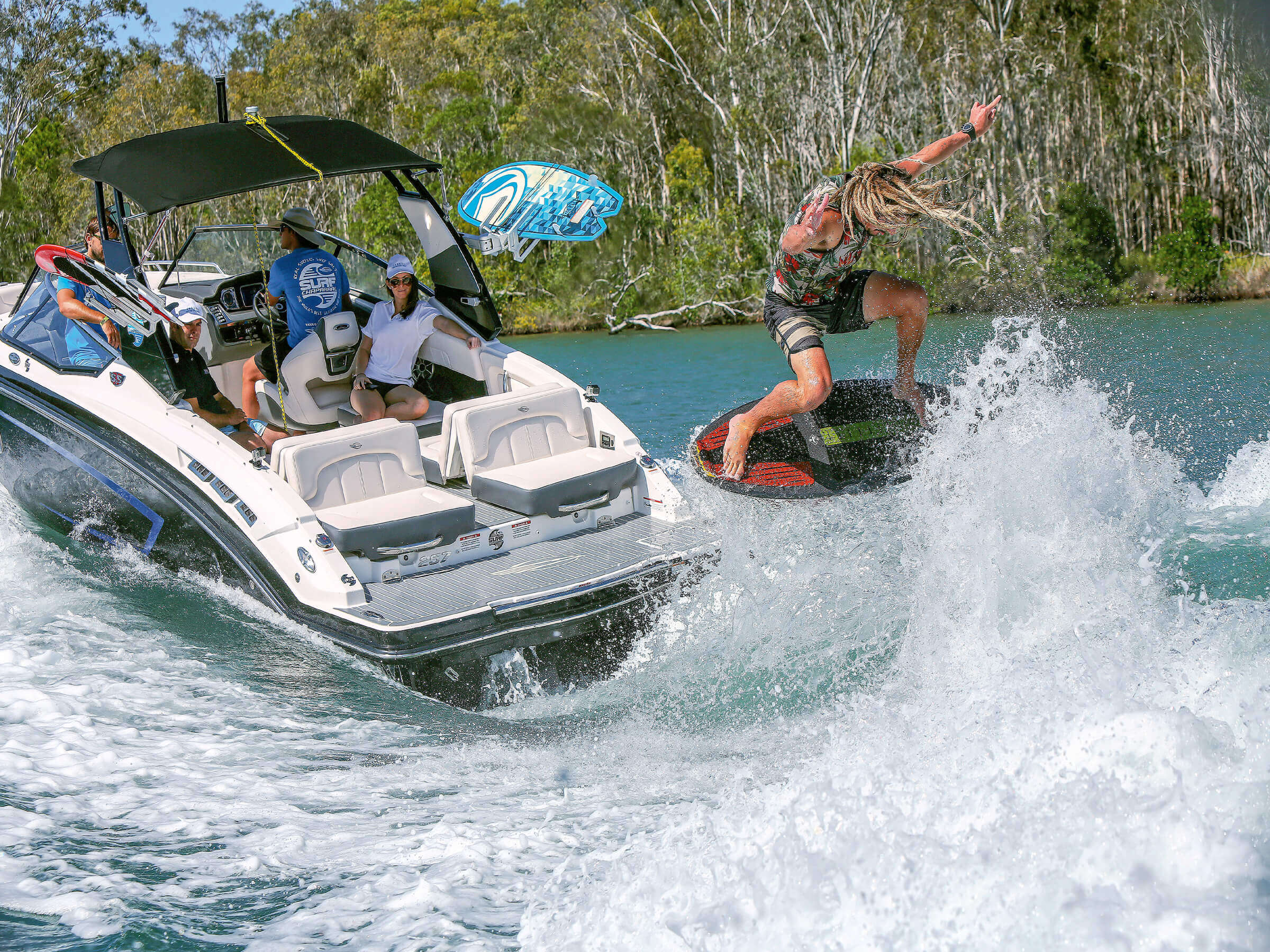 Chaparral’s 257 SSX wakeboat stole the spotlight at the recent Noosa Festival of Surfing.

Real surfers do it in salt. Apparently. At least so the story goes according to the Chaparral Australia folks who, with support from Club Marine, participated in the 2017 Noosa Festival of Surfing on the Sunshine Coast. But they weren’t out in the breakers hanging five or 10 – they were there to show off the unique wakesurfing features of their stylish US-made towsports craft.

And they had some heavyweight help on hand in the form of one of the world’s top exponents of wake and skim boarding, US star Austin Keen. Apart from a pretty serious set of dreads, Keen (below) can also ride a mean board and, after watching a YouTube video appropriately titled Hijacking a Boat Wake, in which Keen skim-boarded from the shore and transitioned straight onto a boat-generated wake, Chaparral contacted him to see if he’d come out to Australia and perform the same stunt – but with a twist.

The idea was to demonstrate the wakesurfing credentials of its new Surf Gate-equipped 257 SSX bowrider and have the US YouTube star transition from the wake onto an actual wave during the surf comp.

Chaparral US has worked out a deal with major ski and wakeboat builder Malibu to licence Malibu’s revolutionary Surf Gate wakesurfing technology for its own boats. It’s a mutually beneficial arrangement as Chaparral prides itself on its saltwater capabilities, while Malibu focuses primarily on freshwater watersports. Chaparral has had to modify its hulls to maximise the benefits of Surf Gate while relying on its own Medallion software system to allow its wakes to be customised to each rider’s tastes and abilities.

Chaparral Australia’s Scott O’Hare says the Chaparral system performed flawlessly throughout the Noosa festival and surprised many of the professional surfers at the event.

“One of the festival events was a surf competition behind the big Chaparral. As it turned out, that day there wasn’t any surf at all, so a number of the world’s top surfers joined the comp, surfing behind the 257 SSX,” he said. “It was amazing to watch, as we had young surfers from Hawaii, the old Malibu long boarders, some over 60 years old, and everyone in between carving up behind our boat with Austin scoring all their moves.

“On another day, a pair of world champion tandem surfers were able to perform all their manoeuvres literally on the one wave. Normally, they’d be lucky to get in only a few moves, but we allowed them to do all their tricks – some even twice. They particularly liked the fact that surfing behind a boat meant no paddling and waiting for that suitable wave; it was just on tap – press the throttle and, next thing you know, she was standing on his shoulders.”

O’Hare said the flipside was that many weren’t used to surfing for so long on one wave.

“One of them told me later that their legs felt like jelly because they weren’t used to riding their boards for so long in one go!” he said.

Keen accompanied many of the surfers on their rides, filming them from his own board and performing tricks for the camera.

“What I’ve learned about Chaparral, and what separates them from other surf boats, is that they are able to cut through ocean waves and sandbars,” Keen explained. “It’s cool that they’ve taken a boat that is adapted to the ocean and actually made it a surf boat, too.

“The 257 SSX throws a really nice wave with a good, clean face and lots of power. It’s pretty impressive. I definitely enjoyed the opportunity to ride here in Noosa, that’s for sure!”

“Safety and practicality are built in because the propellers are at the front of the legs and well away from the surfers and ‘boarders. That’s a big safety feature, plus the exhaust gases are directed to surface well to the rear of the rider, so there are no fumes to contend with. And the drives themselves have proven to be incredibly fuel efficient.”

He added that Surf Gate provides superior wakes that can even be enjoyed by novice surfers.

“I’d never surfed before in my life, but I was up and surfing after only a couple of tries.

“The other great thing about wakesurfing is that you’re so close to everyone in the boat. They can even hand you drinks if you get thirsty while you’re on the wave!”

Learn more about Austin Keen in our Wakes ‘n’ Waves towsports column on P183 of this issue.

You can also surf to chaparralaustralia.com.au for more info on the company’s range of boats.