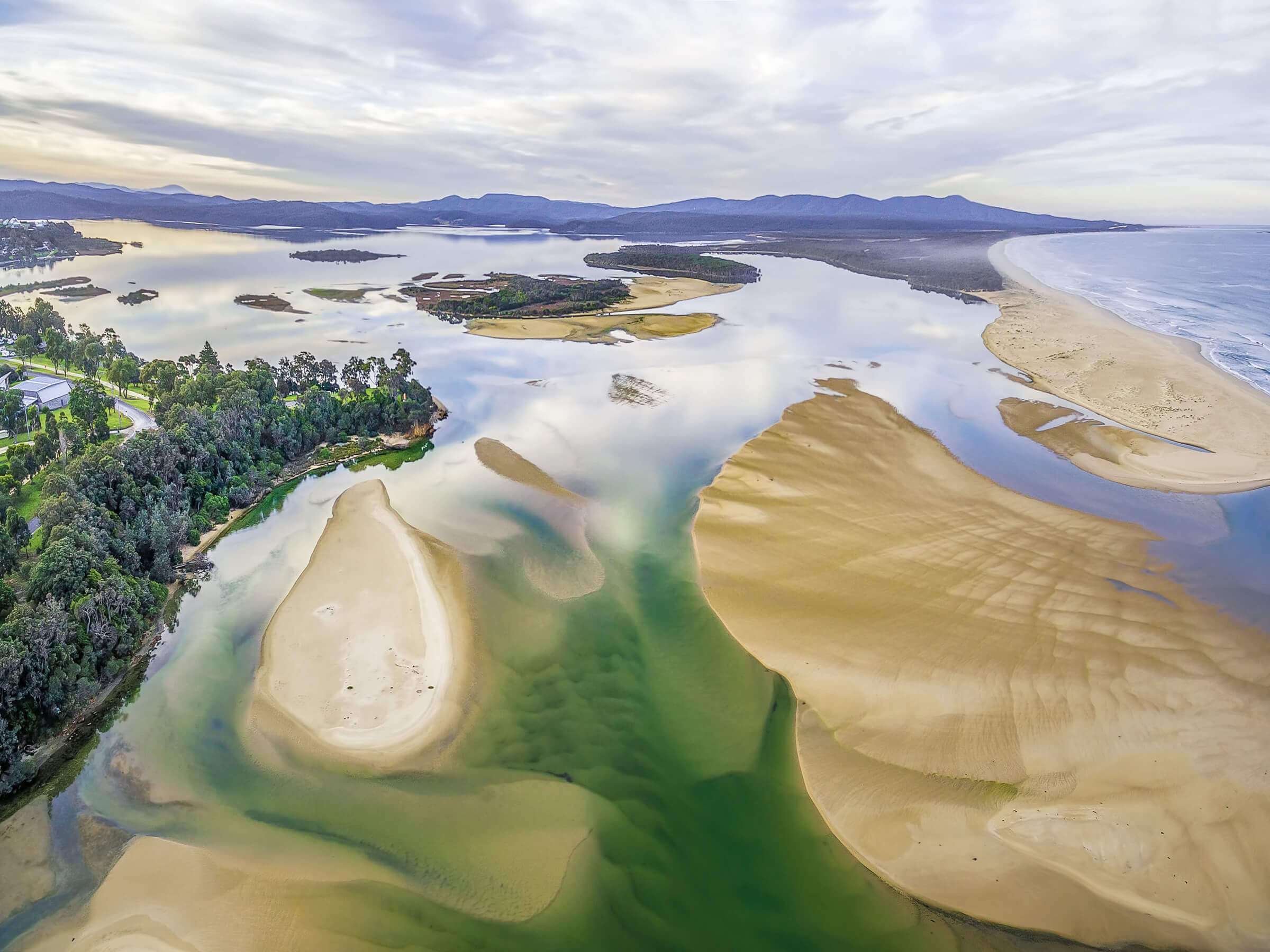 The lower reaches of Mallacoota’s Bottom Lake.
We explore the secluded boating and fishing Mecca of Mallacoota near the Vic/NSW border.

“Mate, you need to get over here right now! We’re in the middle of a big kingi bust-up and they’re goin’ nuts!”

It’s not often I get a phone call like that. At the time we were about five kays offshore from Mallacoota on the Victorian east coast, bobbing around gently on our Stabicraft 1550 Fisher and not catching much at all.

Our mates in the middle of the kingi bust-up were only a few hundred metres away and we could see a swarm of birds diving all around them. So it was rods back in holders and throttle to the stop as we raced over to see if there was room for us in amongst the chaos of churning water and swirling birds.

There were big, big kingfish everywhere, chasing whatever poor unfortunate – and doomed – baitfish that had suddenly found themselves on the morning’s menu. Big, solid gleaming silver and green bodies were lunging out of the water, while diving birds were adding to the chaos and carnage.

I love ocean bust-ups, primarily because they usually provide a rare opportunity for me to actually catch a fish. And with the bonus of minimal effort. No dropping the anchor, burleying up, rig-tying, constant bait checking and all the other routine of conventional fishing.

Instead, it’s pretty much just trolling or flinging your lure into the maelstrom and waiting for a hit. When big kingfish, tuna or salmon are in a feeding frenzy, it almost feels like cheating to slip a lure in amongst the action. After all, you’re virtually guaranteed a hit, and then it’s simply a matter of adjusting the drag and hanging on for a few minutes – or even hours – as the age-old fish vs man contest unfolds. Or not.

Whatever the kingis were chewing on obviously bore little resemblance to our shiny metal lures because, try as we did, we watched helplessly as they were completely, utterly and dismally ignored. If an exercise in frustration results in some kind of physical benefit, I reckon my buddy John ‘The Bear’ Willis and I would have been Olympic champions after this first encounter with the kingfish of Mallacoota.

Our mates in the other boat, a very well equipped ocean-going Grady White, fared little better, which was a minor consolation in the overall not-catching-fish scheme of things.

But there was more to come that day as the kingis continued to prowl the bay just south of Gabo Island. Over the next three hours, and with the birds constantly circling as they looked for the next bust-up, we had three more close encounters of the frustrating kind, although our mates did manage to snare a very muscular barrel kingi of around 10kg.

With a population of approximately 900, which swells to nearly 8000 during peak holiday times, Mallacoota is situated almost equidistant from Sydney and Melbourne in the Gippsland region of eastern Victoria, just south of the Vic/NSW border. The coast around Mallacoota supports a thriving abalone industry and is also a popular holiday destination. It’s surrounded by the Croajingolong National Park, and adjacent to the Cape Howe Marine National Park, and takes approximately 6-7 hours to reach by road from each capital city.

The town is accessed via a twisting 23km road from the Princes Highway leading through scenic native forests, and passes by picturesque Gipsy Point, which is one of several access points for boaties.

From a boating and fishing perspective, Mallacoota Inlet is a haven, offering plenty of options on its tranquil estuarine system. Comprising two lakes, the Bottom and Top Lakes, linked by a stretch of water called The Narrows, the inlet is a large body of water that stretches inland to the Genoa and Wallagaraugh Rivers.

The Bottom Lake connects to the ocean across a narrow bar that demands respect and, in fact, for boaties wanting to access the Tasman, the best bet is the relatively new launching ramp at Bastion Point. The ramp has actually opened up Mallacoota as a serious gamefishing centre, providing convenient access to the Continental Shelf and such sought-after species as bluefin tuna and broadbill swordfish. It’s protected from the swells by a rock breakwater and offers easy and safe access to the ocean. It’s where we launched when we encountered the marauding kingfish and is within convenient reach of offshore reefs and other coastal fishing hotspots.

There are also other launching options along the southern shores of the inlet at Gipsy Point and two other ramps on the Bottom Lake.

There are any number of options in terms of destinations around the system allowing boaties to enjoy the solitude of a remote arm, or engage in some towsports family fun on the more open stretches of water. A relatively shallow waterway, the inlet is reasonably navigable for much of its area, but skippers need to be aware that water depths can vary based on geography and seasonal water levels. There are channel markers in the lower stretches of the inlet near the entrance, but otherwise you’re on your own and need to keep one eye on the sounder just in case.

We explored the system inland up to the bridge on the Wallagaraugh River and relied on local knowledge to ensure we avoided occasional shallow hazards along the way. Mostly, though, the inlet proved to be an easy and enjoyable waterway to explore on a boat, with plenty of spots to tie up along its 320km of coastline. For those days when putting a boat in the water might seem too much like hard work, there are virtually unlimited shore-based options to cast a line, both within the inlet and also on the ocean beaches just outside town.

We had a couple of good sessions drift fishing for bream and flathead along The Narrows, where locals reckoned the mid-winter fishing was best. Baits were a mix of squid, pilchard and soft plastics and we even picked up a couple of juvenile estuarine tailor on metal lures. Target species, both within the inlet and beyond, also include whiting, luderick, mulloway, bass, kingfish, snapper, salmon, gummy sharks and even tuna, marlin and swordfish further out when the bigger sportsfish are moving along the coast on their seasonal migrations.

And speaking of migrations, we had larger company offshore in the form of humpback whales that were heading north for the warmer waters of the Great Barrier Reef, some of the more inquisitive giants coming remarkably close to shore.

Those venturing offshore might also want to call in on Gabo Island, which is situated just 500m offshore from the mainland between Mallacoota and Cape Howe. It’s only a short trip from the Bastion Point boat ramp and is worth a visit to explore its coastline or access the 154-hectare island via its recently upgraded jetty or by simply running up on a sandy protected beach. You can even extend your stay by booking accommodation in one of the historic lightstation cottages via the Parks Victoria website: parkstay.vic.gov.au.

Other leisure options include surfing, strolling the many nature trails around the inlet, or simply beachcombing along the coast.

For those who want to base themselves at Mallacoota and venture further afield in search of boating options, there are a couple of worthwhile destinations within an hour’s drive.

Wonboyn Inlet is a tranquil body of water under an hour’s drive north of Mallacoota over the border in NSW. It offers a large estuary system that fishes well for all the usual estuarine species and anglers can also take advantage of beach and rock fishing options at the mouth of the estuary. There are basic boat launching facilities and the small township has a shop offering basic fishing and food requirements.

Fed by Cann River, Tamboon Inlet is another popular fishing destination about an hour south of Mallacoota and, like Wonboyn, offers boat launching facilities and coastal access for surf fishing. There are also plenty of opportunities to enjoy the pristine natural features located within the Croajingolong National Park, including bush and beach walking.

As far as accommodation options go, Mallacoota offers pretty much something to suit all tastes, from cabins and camping, to regular motel-style and apartment options, B&Bs, house renting and even house boats.

The small township offers a reasonable range of dining options, but you need to keep in mind that not all are open in winter when we visited. During our stay, we dined at the local pub, the Mallacoota Hotel, took a minibus out to the Mallacoota Golf and Country Club for a sumptuous dinner and had a great evening enjoying the tasty Asian delicacies at Lucy’s restaurant.

Mallacoota is a genuine year-round destination for boaties. In the colder months you can take advantage of the less crowded waterways and local amenities, while the summer months provide families with wider options, including towsports and jetski activities. It’s within relatively easy reach of Melbourne and Sydney and is central to plenty of other coastal boating attractions.