March of the spider crabs 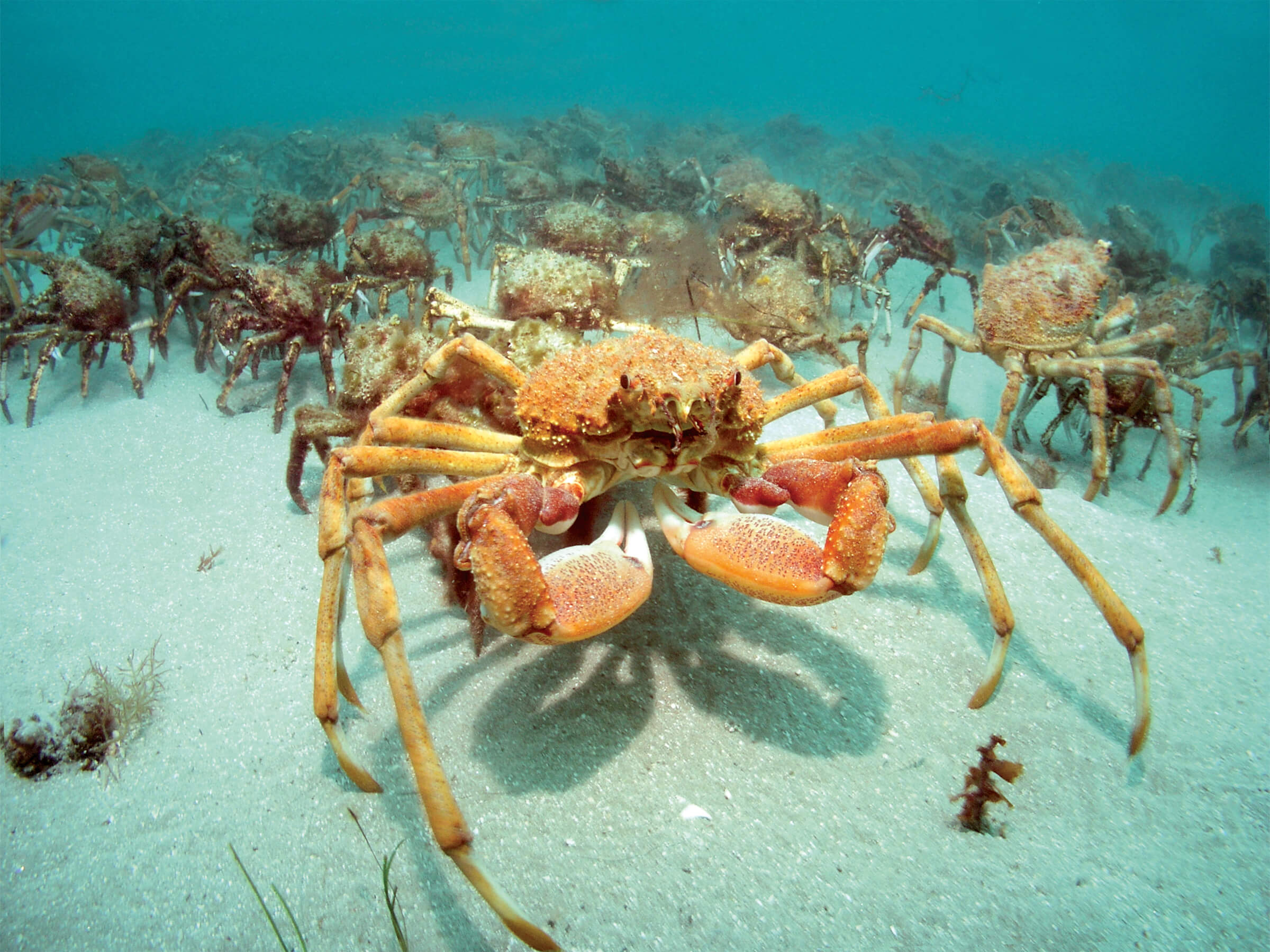 Every year, an army of spider crabs gathers in Melbourne’s Port Phillip Bay ahead of the annual winter moult.

It’s an army like no other and they march not in unison, but in an organised chaos on eight long legs. Their weapons: swollen claws. Their mission: seek shelter in the safety of the sandy shallows and avoid encounters with the enemy … winged giants fashioned with mouths like crushing plates and sharp-beaked birds that swim.

What might sound like the beginning of a sci-fi alien war is, in reality, something much more spectacular: the march of giant spider crabs, one of the world’s greatest marine migrations. And it happens in the waters of Victoria’s Port Phillip Bay.

As the name suggests, these crabs are massive. Their legs are over 70cm long with a body measuring nearly 17cm wide. As the water cools from the sweltering summer heat these soldiers, with their orange armour-plated uniforms, emerge from the depths and advance on the sandy shallows. Their numbers swell into the tens of thousands. The result is a moving mountain of crabs that can be 2m high and extend over 1km. It transforms the turquoise waters of the Mornington Peninsula into a moving sea of orange that blankets the shallows.

This natural phenomenon is believed to be linked to the crabs’ annual winter moult. Like most crustaceans, a hard suit of armour protects these soldiers but, while it protects the crabs, it doesn’t allow them to grow. So the crabs need to get rid of the old armour and grow a new bigger one.

To do this, they secrete a special enzyme that separates the old shell from the underlying skin, while a new soft, paper-like shell is developing beneath the old one. The crabs then absorb seawater and swell up, causing the old shell to come apart – the soldier’s shell opens up like a lid and the crab extracts itself.

Once one crab starts to moult, it sets off a chain reaction, causing the rest of the orange-clad army to moult almost simultaneously. While moulting allows the crabs to grow, it also helps rid them of parasites and other creatures growing on their shells, including bacteria that can weaken and erode their protective uniform.

It’s thought that by aggregating and moulting together, the chance of being eaten is lowered – it’s a simple case of safety in numbers as, during this moulting process, the soft crabs are vulnerable to hungry hunters. But no army, no matter how big, can protect all of its soldiers from attack. Giant smooth rays swoop down across the troops with their 2m wing span, sending the crabs scattering and using their chisel-like teeth to devour any on the perimeter. Australasian fur seals and small sharks also target the crabs when they’re most vulnerable, using their speed and agility to out-manoeuvre them for a quick feed.

It’s not just enemies in the water the crabs need to defend against. They’re also subjected to aerial assaults from birds that spear through the water and use their wings as fins to swim as they attack and tear apart the soft flesh of the crabs with their sharp beaks. Over a period of weeks the sandy shallows turn into a battlefield, with abandoned suits of armour and casualties littering the sea floor and washing up on the shore. The survivors retreat back into the depths of the bay.

Another less popular theory for the mystery of the giant spider crabs’ march is that by converging together, they increase their mating success, as crabs can only mate when they moult.

This demonstrates how little we know about the unique environment of our southern shores and the strange and wonderful animals that are found there.

What we do know is that this natural wonder is unique to Victoria and occurs as the warm waters cool between late March and June. It’s a phenomenon that needs to be seen to be believed – and anyone can.

WHERE TO FIND THEM

Your best bet is between Rye Pier and Blairgowrie Yacht Squadron on the Mornington Peninsula. Ring the local dive shops for the latest updates on the crabs’ movements. Just as quickly as they arrive, the orange army soon disappears back into the depths of the bay, so mark the dates in your diary so you don’t miss out.

All you need is a mask and snorkel or a pair of swimming goggles. Simply float on the surface and watch in awe as the seemingly chaotic events unfold below, with these long-legged crabs as far as the eye can see. They’re harmless and the entire family can enjoy the spectacle.

And if you miss out, you can always keep an eye out for individuals marching around the southern end of Port Phillip Bay during the year. However, sometimes they’re so well camouflaged they might be hard to spot. Some love adding a cloak of camouflage to their orange attire that includes an elaborate array of other marine life such as sponges, sea squirts and seaweed.