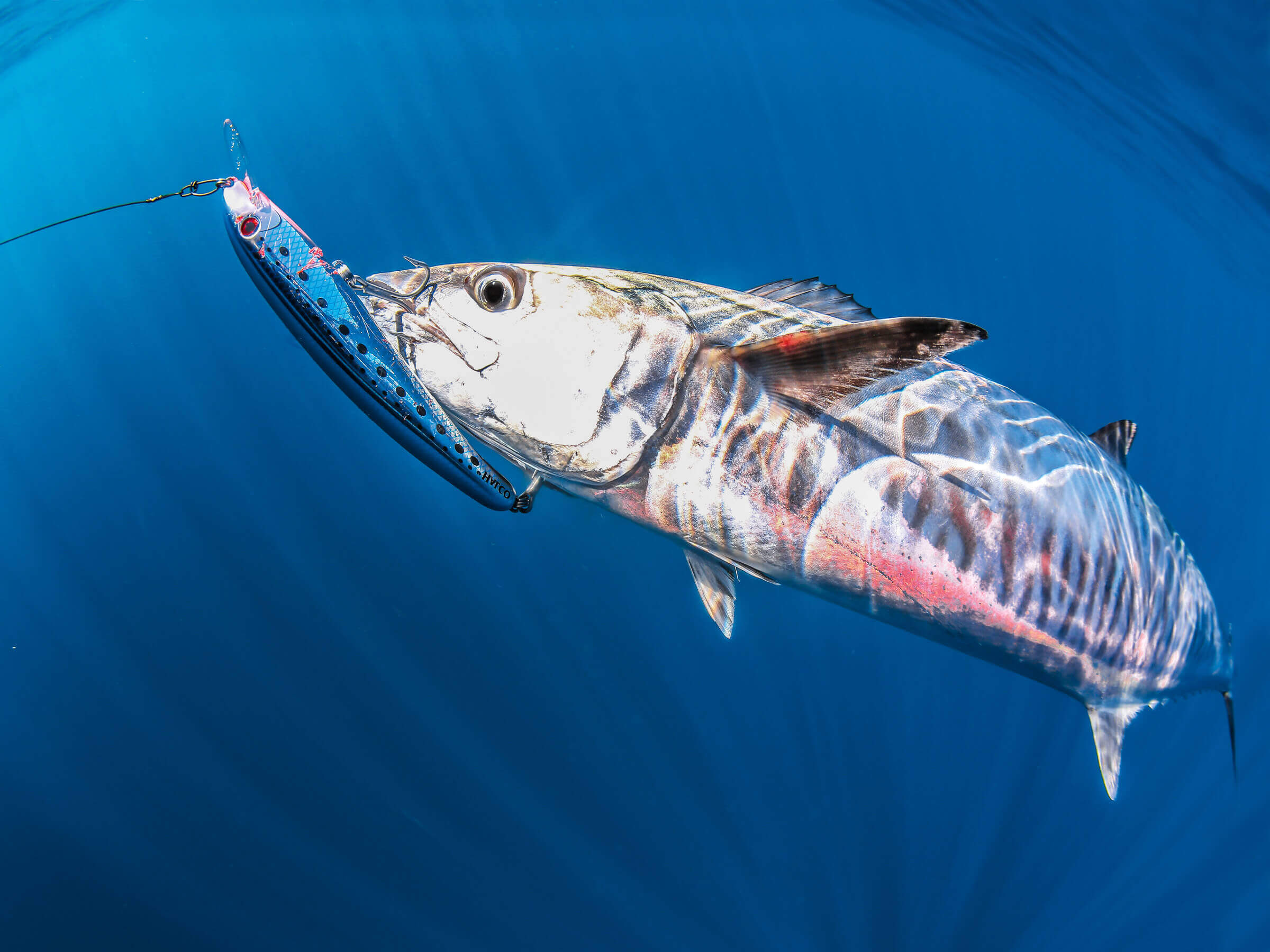 Setting up the right spread of lures will greatly increase your catch rate. The golden rule of fishing: fish where the fish are
Few angling techniques are as easy or as effective as trolling – and with a few handy tips, you’ll soon be catching anything from flathead to marlin.

The great thing about trolling is that you can do it anywhere for just about any species. You can troll up a creek for natives, or miles offshore for tuna – in fact, just about every predatory fish will eat a lure. Over the years, I have caught a wide variety by trolling – from trout to flathead and kingfish to marlin, as well as some oddities like blackfish. It really is a universally popular technique.

Despite the wide variations in species and locations, the basics of trolling are very similar across the board, and mastering these techniques is instrumental to success.

Trolling allows you to cover a lot of ground effectively – a big bonus when fishing. It’s the ageold fishing rule: the more fish you get your offering in front of, the more you will catch. It’s a numbers game, but you can put the luck in your corner if your lures are in the strike zone.

It doesn’t matter how good your lures are or how expensive your boat is, if you aren’t fishing where the fish are, you won’t catch anything. That’s the golden rule of fishing – fish where the fish are. Sure, trolling allows you to cover substantially more ground, but you still need to be smart about it and focus on a specific area to maximise your return.

Some anglers see trolling as a lazy man’s style of fishing … just throw a few lures out the back and cruise around the ocean. However, getting your lures in front of the fish is actually highly technical.

IN THE STRIKE ZONE

First and foremost, it’s important to understand the target species and where they like to reside. If you’re chasing Spanish mackerel, it’s all about reef drop-offs and bait concentrations, while big flathead in the estuary will see you targeting the channel’s edges and gravel beds.

The most obvious place to troll is around structure, but not all structure is equal – concentrate your efforts around specific parts of it, such as the up-current side of a bommie or the deep side of a point. Having a basic understanding of currents and their impact is also important, as they play a vital role when determining where the fish will be. This is just as important in a river as it is offshore.

It’s a common misconception that fish hide behind a structure, out of the current. It’s often quite the opposite, though, with the fish often sitting in the current. The current pushes into the structure and creates an upwelling in front of it. Fish, especially pelagics, ride this pressure wave, exerting minimal energy while being in a prime position to attack prey that comes within striking range. This rule applies around the country, from GTs up north to kingfish down south. The golden rule here is: if there’s no run, there’s no fun.

You can narrow down the search area even further by looking for irregularities along the face of the structure. Look for spots where the reef juts out, like a point, isolated bommies, or anything that disrupts the current.

A classic example is the Great Barrier Reef’s outside edge, especially the ribbon reefs. With drop offs stretching hundreds of miles, it’s too much ground to troll – instead, find any little aberration deflecting the current, like a point or bommie. That’s where you want to start.

The beauty of trolling is that you’re covering ground searching for potential fish-holding locations. Use your eyes, sounder and plotter to find them.

Step two is selecting the right lures for the job. While you could use natural bait, for the purpose of this article I’m focusing on lures. Why? Because you don’t have to get your hands dirty.

Your target species will dictate which lures you use. While this may sound logical, you’d be surprised how many anglers simply chuck anything out the back and hope for the best … trolling is a science, and a bit of thought needs to be put into it.

The choice of lures is unlimited. I’d even go as far as to say there are too many on the market these days, making it more confusing than easy. Walk into any Compleat Angler and you’ll find racks upon racks of lures on offer – which can be confusing, so don’t hesitate to ask the guys in-store for advice.

As a really basic guide, if you’re chasing pelagics, you’ll want to run a shallow- to medium-deep-diving lure. A tight shimmering action will allow you to troll at high speed, making it perfect for pelagics.

On the other hand, if you want to target demersal species, you’ll need deep, or even mega-deep divers that get you down near the bottom. They can’t be trolled as fast as the tighter-running shallow versions, but they’ll hold deeper in the water column right in the strike zone for the likes of mangrove jacks or snapper.

The beauty of trolling is you can always mix it up with a spread that covers all options – running a selection of mega-deep divers, medium-running lures and surface lures puts you in with a chance at just about anything.

However, select a spread that is compatible. A lot of cheap deep-diving lures only work at very slow speeds, which is often too slow for shallow-running lures or poppers. My advice is always spend the bucks on decent lures, like Aussie-built Halcos, which have hand-tuned deep divers that can be run at speeds to match the surface lures.

When setting up a general trolling spread to cover all bases, select lures that cover as much of the water column as possible. A basic spread can be used just about anywhere – headlands, estuaries, freshwater, reefs up north or down south, you name it. Obviously, in the context of this feature, the examples are very general, so fine-tune it to suit your local waters.

A spread consists of just three lures: a mega-deep diver, a medium runner, and a shallow or surface lure. This is a really basic layout so, depending on what you’re targeting, it can be swapped, chopped and changed. If you’re trout fishing in a lake, then smaller minnow patterns are best, while if it’s barra up north, deeper divers will dominate.

The first lure, which is run in tight, is a mega-deep diver, such as the Scorpion Crazy Deep. This lure quickly dives down to its running depth and can be towed on a relatively short leash. It is prime for species like big flathead, Murray cod, and barra, as well as coastal species like coral trout and even tuna.

Being close to the boat is important when chasing structure-oriented species that need to be wrestled away from the reef. In most cases, I set this lure just 20m back. When fishing right in tight against the ledges, especially coral reefs, I run it on the outside, away from the reef edge, to minimise the chances of snagging as well as being destroyed by a fish.

Behind the deep diver, some 25 to 30m back, is where I like to run the shallow/medium diver, which could be anything from a Laser Pro to a Trembler. My favourite colours for pelagics are metallic silver and purple. If you run this lure at the same time as a mega-deep diver, do so in the opposite corner to minimise tangles.

The final position sits above the mega-deep diver or down the centre. If I am fishing an area with lots of pelagics, then the trusty old Roosta popper owns this spot. At times, a shallow running is just as deadly.

To ensure the lures are running at their optimum, use a loop knot or coast snap lock. Always run the lure beside the boat to ensure it is swimming smoothly. If the lure is still pulling to the side, try bending the towing eye the opposite way.

Upgrading the hooks is highly recommended, as many cheap lures come with cheap hooks. Even decent lures, like Halcos, need to be beefed up at times.

When chasing the likes of black bass in Papua New Guinea, you’ll need the toughest hooks, such as from VMC. The same goes for chasing big tuna … although, most anglers actually swap to singles in this case, as single hooks are much stronger and offer a cleaner hook-up. Not all lures run as well on singles, though, so you may need to do some experimenting.

If you do use the trebles, push the barbs down – this will give you a better hook-up rate and make it a lot less dangerous when you land the fish. It’s also much better for the fish when releasing them.

TO WIRE OR NOT TO WIRE

In the old days, I used to run multi-strand wire, especially in the tropics. These days, though, I find I’m refining my techniques to ensure I keep getting results and wire is rarely used. The only reason we use wire is to avoid bite-offs but, in most cases, the lure is in the fish’s mouth, so their teeth can’t even reach the leader. At the end of the day, I get more bite on mono, so it’s often worth the risk.

Obviously, the exception to the rule is the razor gang, like wahoo and mackerel.

If you need to use wire, then run a short length of single-strand wire. Linked to the wind-on via a small heavy-duty swivel, it only needs to be 20cm long. Join the wire to the lure with a haywire twist, which still allows the lure to run properly,

When you’re fishing in tight against structure and you connect to a decent fish, you need to act fast and pull away from the edge. This is particularly so for dirty fighters like kingfish, GTs and those dreaded PNG black bass who love to smash you up in the reef.

Plan ahead so everyone knows what is happening – the moment you hook up, you need to put things into motion and head for open water. There is no need to power away, though, just head away from the structure at a steady pace.

Do it right and this manoeuvre will give the angler a good angle on the line, while leading the fish out of the danger zone. Most fish are initially confused after the strike and can’t work out why their lunch is suddenly leading them out to sea. In most cases, they will allow themselves to be towed for a short while before waking up to the game – exploiting this will give you the edge.

Lure trolling is a great way to catch fish and is one of the best ways to get the family involved – while you do all the hard work of finding the hot spots, everyone else can have fun holding the rods and catching the fish. I know my kids love it, because all they have to do is wind the fish up!